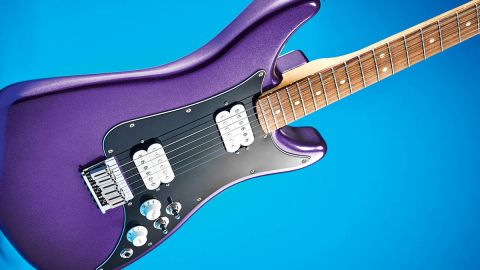 Sure there is some Strat in its DNA but the Fender Lead III deserves to be played and heard. It's bright, super-playable, and something different

What made the original 1970s Fender Lead go the way of the dodo? Why do some electric guitars just fall through the cracks? It could be changing tastes or marketing missteps, but whatever it was it wasn't because the Lead sucked.

Allied to the dual humbuckers, the Lead III had switches for tapping the humbuckers. Another selling point: after all, if the lack of a singlecoil tone was something that made you demur, surely the coil-tap would have you running to the cashier with the Lead III under your arm.

Bono had a Lead II. Clapton played one. And of today's roster of high-profile players, St Vincent has a heavily modded Lead. That said, somehow it never acquired cult status, and when we pick it up today it is like looking at a totally new model.

There's an alder body, a bolt-on modern C-profile neck and a neat six-saddle hard-tail bridge. A look at the fretboard is a sign of the times; thanks to CITES, Fender guitars at this price point carry pau ferro instead of rosewood 'boards. The feel is similar, though the pau ferro comes up a bit lighter to the eye.

The double-cut body makes the Lead III feel compact and manageable. The scale length is nonetheless a Strat/Fender standard 25.5". It feels well-balanced whether played standing or seated. The neck is superb. The modern C is a great shape for today's player. The finish is cool, too. There's a lot to like here.

You might find thinner necks on Ibanez or Jackson's lineup but the Lead III is definitely shreddable. The neck heel is a little clunky but nothing too off-putting. It feels good to hold a note and bend it. There's a give to the string tension that makes it just so malleable.

As for the sonics, well those Fender electrics with thin alder bodies do come in with plenty top-end, and this is no different. The Alnico II humbuckers are more vintage than super-hot but they've got plenty of fire to them when you light up your gain stage. There's plenty of sizzle, and a good deal of crunch.

While the coil-splitting feature sees an inevitable drop in output when switching from the humbucking position, having a little singlecoil quack to play with is always a good thing. Selecting both pickups then tapping them brings forth a Strat-esque voice, a good bit of punch that cleans up nicely when you take the volume down.

But here we go again, talking about the Stratocaster – Leo Fender's most-celebrated design – in a review about the Fender Lead III. Little wonder it went out of style. Maybe it needed a better name? Maybe it just needs more people to try it. No question, it holds its own.

MusicRadar Verdict: Sure there is some Strat in its DNA but the Fender Lead III deserves to be played to and heard before it is believed. It's bright, super-playable, and something different.

The Lead III's switching allows you to mix and match humbucker and singlecoil tones.

The Lead III has a neat six-saddle hardtail bridge.