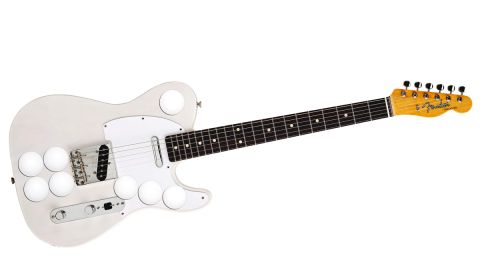 Expensive, yes. But valid? We have to say it’s a yes from us.

If you’re a Jimmy Page guitar-playing acolyte, there’s a good chance you’ll have already placed your order for this USA guitar along with its Mexican-made dragon-painted version due to be released in the middle of the year. All good. But aside from homage, what is this Telecaster bringing to the table?

Made in Corona, it tops Fender’s Artist Series and is the most expensive guitar produced by Fender outside of the Custom Shop - period. It does come with some case candy, including eight round stick-on mirrors, but that only goes so far in sweetening the pill and, along with its signature status, obviously adds to the cost. It’s classed as a ’59-spec vintage-style Tele, but Fender is a little unsure of exactly what the original model was as any body ID was removed when it was originally stripped. The neck stamp on the original is February ’58. “It is a very early version of the rosewood ’board and we haven’t seen very many of those,” says Master Builder Paul Waller, who spec’d Page’s original guitar.

Another anomaly of the original that’s replicated here is the top-loading bridge but on a body that still has the usual through-stringing holes. “In ’59, Fender had done a top-load-only version, but this has the ability to string both, so it’s impossible to say whether [the original] was an early production version of the ’59 or a ‘partscaster’ that got assembled after the fact with leftover parts,” says Paul.

History aside, it means that this new Tele sits rather nicely between the most vintage-aimed Fender American Original Series ash/maple ’50s and alder/rosewood ’60s Telecasters (even though both are priced considerably lower at £1,599 and £1,689 respectively). Unlike the round-lam rosewood fingerboard of that ’60s Tele, the Page model has a period-correct slab rosewood ’board with vintage-style small frets (approximately 2.07mm wide by 0.98mm to 1mm high). And while both American Original Teles feature a more modern, flatter 241mm (9.5-inch) fingerboard radius, the Page comes with the smaller vintage-correct 184mm (7.25-inch) - the only USA production model we’re aware of with that radius.

Like the American Original ’50s Tele, we have a light ash body. Under the milky off-white semi-translucent finish you can see the broad grain of the ash and the offset seam of the two pieces on the bass-side flank. The edge radius is small, as it should be. Overall, there’s zero modernism. For example, the truss is old-school and adjustable under the single-ply white scratchplate at the base of the neck. Indeed, remove the eight pickguard screws and you’ll see the angled slot between the pickups that channels the neck pickup wires to the control cavity - a feature on all Teles from early 1951 through to mid-1969.

Exactly why Fender switched to the top-loading bridge (without string holes through the body) isn’t firmly documented, but it was short-lived. Another historic change was from the trio of brass saddles to the threaded-rod steel saddles we see here. Combine those features with the ability to through-string the guitar and you have the sort of unusual specification the Custom Shop excels at, and it’s worth remembering that if you ordered a guitar like this from the Custom Shop it’d probably cost you 40 to 50 per cent more.

Playing artist guitars can be very revealing about their preferences, but as our Tele had clearly missed final setup (unless Page used it for slide), there’s little we can glean. It ships with 10s and is top-loaded, so we kept it that way but added a neck shim to get a little more back-angle behind the saddles to the anchor point at the back of the bridge, and to bury the slot-head height adjustment screws within those threaded rod saddles. If you’re a stickler for detail, it’s quite important to get the string spacing at the bridge even, because the B, D and A strings need to sit virtually over those screws.

Classed in early Fender press releases as a “custom Oval C”, the neck was referred to as a “custom Thin D” in later PR - again, inspired by the original’s neck - which we’d say is more accurate. It’s another subtle shade that tapers from a very contemporary feeling 21mm depth at the 1st fret to a fuller, meatier 24.5mm by the 12th, with what feels like slightly more shoulder to it than the ‘deep C’ of an American Professional, for example, which on the samples we’ve measured averages about 0.5mm deeper at the 1st fret and around 1mm thinner by the 12th. We set the action height at 1.6mm on treble and bass, and went for a virtually straight neck with minimal relief. You might be different, but too much relief can easily induce upper-position choking.

As described, though, this plays nicely - very vintage-y. Along with the slightly relaxed bending feel of the top-loaded strings, there’s subtly less fight than you might experience with a through-body Tele strung with 10s and, acoustically, there’s a subtle difference to the voice. Comparing and listening to a couple of other ash/rosewood older Teles, it’s like you’ve cleaned up the lows and lower mids a little; the top strings sound a little lighter, crisper, too.

Amp’d, then, there’s plenty of punky attack from the bridge, which certainly drops you right into those late-60s crunchy tones with ease. As wired, though, pulling back the volume a little not only cleans up that sizzling crunch but also pulls back the highs a little. With such a large cap, the tone control does get very dark as you wind it down - handy, though, for an almost wah-like sweep if you roll the control back and forth.

The neck has a softer attack but a very expressive bluesy and quite woody voice, while the mix retains admirable hollowed sparkle. Voiced like this and on what is a nicely resonant lightweight platform, it’s behaving like a good (very good) Tele should: yes, there’s that visceral cut when you need it, but it’s easily and effectively tamed on both pickups. It’s the sort of guitar that you can pull your onboard volume and tone down and just turn up your amp. It’s quite a ride.

This one has us in a quandary. It’s the most enjoyable American Original-style Tele we’ve played and sits very nicely between the ’50s and ’60s Teles. But it’s a lot more expensive. Obviously, as a Page signature model - a tribute, really - the cachet and added case candy accounts for some of that. But even then, the rise (£660 over the ’60s Tele) seems steep, doesn’t it? If it were a one-off limited-edition run, perhaps that could be justified, but Fender isn’t marketing it as such and, like any other production model, its only limits are from customer demand.

But we can’t just dismiss it as just a package for Page-ophiles. Outside of the Custom Shop, this is one of the best vintage-style brand-new Teles we’ve had our hands on: the weight, resonance and fiery but tameable tones combine to elevate it above just good. The top-load/through-strung option is another aspect that will keep Tele fans twittering for ages. Of course, you can choose either - or a combination of both - and, ultimately, whether or not the additional outlay is worth what your hands and ears are telling you. Expensive, yes. But valid? We have to say it’s a yes from us.