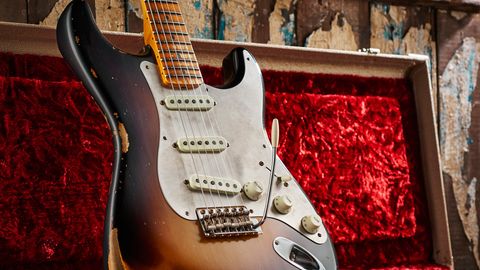 This guitar wants centre stage and a player who’s not scared of going for it. If that’s you, you might’ve found your dream Strat.

Despite ordering this guitar in the middle of 2016, it only turned up at the end of the year.

As such, it’s no longer in production, but with some key UK stores still holding stock, and after spending time with the guitar, it’s definitely worth a look.

Yes, it’s yet another bashed-up Strat, but the El Diablo’s most visually identifiable feature is its ‘raw’ (untreated) aluminium scratchplate. And there’s plenty more subtle tweakery that makes the El Diablo its own beast.

First off, while not overly light, it’s bang on 8lbs (3.55kg); the alder body is two-piece and the maple neck is quarter-sawn, a stiffer cut, rather than slab-sawn as per the majority of Fenders built since the 50s. If the weight gives a feeling of business, the neck is equally ‘working tool’, a nice V’d handful in the lower positions that fills out to clubbier C-meets-D by the time your hand hits the body heel.

Our sample is extremely well aged and, though classed as a Heavy Relic, it really doesn’t look as trashed as some we’ve seen. With the quite shiny nitro ’burst through to the convincing belt-buckle wear, it looks pretty authentic.

The neck wear combines the bare ‘oiled’ feel of the main playing area of the back with the pitted dings around the headstock, while the very chunky Dunlop 6100 fretwire suits the modded vibe, as do the knobs and, to a lesser extent, the pickup covers, which look like new additions.

Apart from telling us the pickups are “output calibrated and packed with fiery Fender tone”, we have little to go on.  The DC resistances measure 6.12, 5.79 and 5.46kohms from bridge to neck. The magnet staggers are vintage-like, slightly less protruding on the bridge pickup with the bass side tilting greater from the neck pickup to the almost flat bridge.

Aside from the flatter 241mm (9.5-inch) ’board radius, which reflects so many old refretted vintage Strats, there’s no other modernity aside from a couple of tweaks to the electrics. Along with the five-way lever pickup selector with combined neck/ middle pickup tone (tone 1) and Fender’s Greasebucket circuit for the bridge pickup only (tone 2), the volume control has a simple capacitor and resistor treble bleed circuit to help maintain those crisp highs with volume reduction.

With a pretty dirty alt-rock amp sound, a couple of clean boosts, and plugged in on the bridge pickup, the El Diablo lives up to its name with surprisingly balanced girth, especially with the Greasebucket tone knocked back a little, which pulls down the ultra-highs but doesn’t add ‘wool’.

We’re straight into a grainy, edgy roots-rock that adds a little lower-mid thickness when switched to the middle pickup, and at the neck there’s less ‘tube’ than we’d expect but plenty of clarity where our reference Strat sounds a little plummier and less clear.

Its unforgiving voice won’t fail to cut through a dense band or track mix. It excels in old Americana, and is hugely touch-sensitive and responsive to pick position. Even with some dense modulation, it’s strident and cut-through, while in a more mellow setting it adds noticeable clarity and note separation, without veering on the too thin/too edgy side of the tracks.

There’s a clean-edged power to this Strat (more its full-bodied voice than its output) that’d kick some butt in a rowdy bar room. This guitar wants centre stage and a player who’s not scared of going for it. If that’s you, you might’ve found your dream Strat.