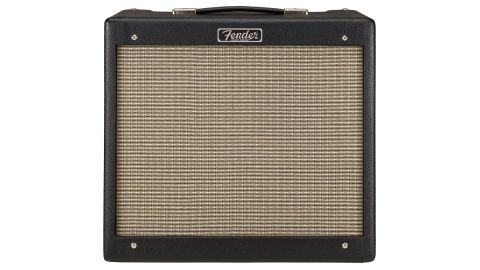 It’s easy to see why the Blues Junior remains a firm favourite.

Fender’s tweed and blackface amps from the 1950s and 60s are revered for their great tones and historical significance - however, they’ve both been outlasted by the massively popular Blues Series, which has been in production since around 1993.

While the larger Deluxe and DeVille combos were transformed into the Hot Rod range in 1997, the Blues Junior, introduced slightly later in 1995, has stayed with the same name ever since, despite a number of updates over the years.

Its compact dimensions, light weight and pedal-friendly credentials have made it one of the most popular gigging combos in the world, but for 2018, Fender has updated its Pro Junior, Blues Junior and Hot Rod amps to the new Mark IV specification, which features various tweaks, including Celestion’s excellent A-Type loudspeaker.

The cabinet styling is more or less the same, borrowing its dimensions from the narrow panel tweed amps of the 1950s, while the black vinyl and tastefully yellowed silver sparkle grille cloth is inspired by the blackface reverb-equipped combos of the 1960s.

The cabinet internals are mostly unaltered, with a large single-sided board holding most of the small components, including the top panel controls. This is joined by ribbon connectors to a smaller through-plated board, which holds the Junior’s five valves - three 12AX7s and a pair of EL84s. The reverb spring, in common with the rest of the range, is driven by a dual op-amp. Controls include gain, bass treble and middle, reverb level and master volume, with a small push-button ‘Fat’ switch.

In use, the Junior’s reworked preamp and the new loudspeaker combine to unleash a stunning range of Fender tones, from spanky, sparkling cleans, to fat and smooth midrange crunch that’s spot on for blues and classic rock. The Fat switch adds a generous midrange boost and can be remote-controlled from a footswitch for greater versatility, while the improved reverb circuit is very impressive, with no noise and a smooth, warm delay that feels more integral to the overall amp tone, harking back to the best blackface reverbs of the 1960s.

No matter what guitar you use, the Blues Junior flatters single coils and humbuckers alike, not to mention drive pedals with plenty of volume. The sounds are top-drawer, comparing well against many so-called boutique amps costing four times the price. Factor in the compact dimensions and light weight, and it’s easy to see why the Blues Junior remains a firm favourite.