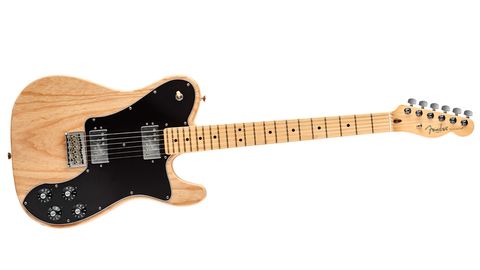 It’s easy to think that mixing up the recipes of classic designs, a hybrid approach, is a relatively new trend usually reserved for boutique brands.

But that’s not true, as is proved by Fender’s Telecaster Deluxe, which first appeared in January 1973 showing off a pair of Seth Lover-designed humbuckers that had already appeared on the revamped Telecaster Thinline and Custom (neck position only).

Back in the day, of course, the Deluxe, which also sported four controls and a shoulder-placed three-way toggle switch, clearly intended to do battle with Gibson’s thicker-sounding Les Paul. In truth, like many hybrid designs, it became very much its own thing. 44 years on, the Deluxe is just as relevant in this latest American Professional guise.

It’s a close cousin to its original incarnation (albeit with Telecaster neck, not the large-head Strat neck of the original), but with a raft of upgrades plus a pair of Tim Shaw-designed Shawbucker covered humbuckers that outwardly ape Lover’s original ‘Wide Range’ humbucker design.

Based on the same platform as the Shawbuckers we’ve seen and heard on the Strat HH and HSS, these have “a 3+3 cover”, explains Tim Shaw, “so the treble strings are largely being sensed at different points along the scale length than they would have been in a traditional six-hole cover. The 2T [at the bridge] is a bit hotter than the 1T, as you’d expect, but the internal screws and slugs aren’t the same.

The neck pickup has a screw coil and a slug coil, and three of the slugs are threaded and adjustable. The bridge pickup has two screw coils with three screws up and three screws down in each coil. The inductance loads are different in each; we tried both variations, as well as some others, before deciding we liked this combination the best.”

Pulling this one from its neat new lightweight moulded case, its untinted three-piece natural ash body (with rear rib-cage cutaway) and maple neck throw us back to the 70s, but this is not the Fender of those days. It’s a good weight for starters, the gloss far from over-thick, and there’s an impressive ring to the unplugged response, the bridge following the non-vibrato Strat style with six bent-steel saddles and through-body stringing.

Trying various amps and comparing the Deluxe with other twin-humbucker guitars (set-neck and bolt-on), it takes us a little while to find its voice. Plug in the standard American Pro Telecaster, for example, and it sounds like a Tele, albeit noticeably lower in output than this Deluxe.

Where our PRS McCarty sounds stronger and more plummy, the Deluxe sounds a little older-styled, not quite as powerful and slightly rounded in the high-end by comparison. We spent some time dialling in the pickup and polepiece heights/tilt, especially on the neck pickup (which had an over-big bass end on delivery); lowering the bass-side more than you would typically with a humbucker didn’t harm anything.

If you live in the boosted clean/crunch world, it sits really nicely: the bridge is bright but not brittle with a lovely rounded jangle; the mix, too, sounds really ‘Fender’, like a Tele mix that’s been EQ’d and beefed up without losing the character. But the Deluxe is just as good for cleaner, jazzier comping, too, not least with the four controls to balance the thrum with a dash of clarity.

It seems to excel as a bluesmaster, drifting seamlessly from spikier Albert Collins and the clarity of BB King through more muscle-bound and rockier bar-room blues. A bit of open G-tuned Keef? Oh, yes.

If you’re prepared to work the controls, you’ll hear a myriad of shades - the treble bleed circuit on the volumes alone helps to clean up the considerable girth, even on a clean amp setting, while retaining clarity. Anyone having to cover a lot of ground would get good mileage here.

Part of this sonic appeal lies with the unpotted pickups - the coils are unpotted, but there’s a double-sided adhesive ‘gasket’ that holds the cover to the top of the coils - which lend their own character, best described by renowned pickup maker Jason Lollar as “like reverb - a little extra air in the sound”.

By design, then, these are lively vintage-style ’buckers, but with that comes some microphonic handling noise, seemingly enhanced by the pickups’ mounting on the large scratchplate. They ‘clonk’ loudly if you hit them with your pick, for example. While we can evoke some high-pitched squeal standing right in front of a pretty cranked and gained Marshall voice from our test rig, in the styles we’ve described, aside from the handling noise, we really don’t have a problem.

Mind you, pickups like these would be more typically found on vintage-style boutique builds, not in this extremely mainstream range where, until we spoke at length to Tim Shaw, we had wondered if they were faulty. Fender actually sent us a replacement set - which were identical.

But it gave us the chance to remove the cover on the spare bridge pickup - not easy with that gasket - and wax pot the cover to the coils. This certainly deadened the microphony and brought the pickup in line with others, such as PRS’s 58/15s. There would be other ways to dampen the liveliness, using stronger springs on the pickup mounts (or rubber tubing) and putting foam rubber under the pickups, for example.

“Yes, this particular structure is more microphonic than others - like using two mounting rings would be,” confirms Tim. “When those gaskets are installed, they’re pressed together hard with a clamp, so they should be pretty dead. They’re clearly not as dead as waxing them would have been, as you’ve found, but deader than a comparable vintage Gibson’s assembly.”

“Were the pickups not on the scratchplate or were it in any way differently designed, the sound of that guitar would be lessened greatly,” suggests Fender’s Joey Brasler, vice president of Product Development. “The open, airy, almost single-coil quality of those pickups is so sweet; I wouldn’t trade anything about them for all the feedback- suppression in the world. I loaned a Tele Deluxe to Keith Howland of Chicago, who played it for most of the first night he had it, shunning his usual guitar changes. He loves it and won’t give it back... ever, he says.”

Above all, it has a great weight, lively response and, rather like the Am Pro HH Strat, is proof that ’buckers on a bolt-on have huge validity.

There’s considerable subtly here. Yes, it can be quite a retro rocker, but those controls can access an awful lot more. It’s a clever ploy, too; it’s most definitely a Fender but has sounds you can’t access from your standard Strat or Tele.

Add in the smart build, weight, resonance and easy adjustment to personalise your own setup and we have a classic-looking Tele that’s a real mature player’s tool. Not everyone will get the vintage-y unpotted pickups, but our advice is to work with that often perceived ‘fault’ - it really seems to add to the character.

Our favourite Am Pro? For this writer, it probably is... and awfully tempting, too.