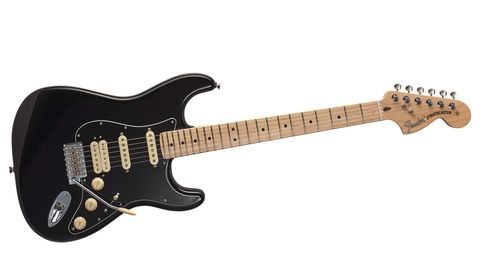 The last thing we thought we needed was another Strat, but this American Performer got under our skin and got the majority of our play time.

Another year and another refreshed range of classic designs from Fender.

Last year we had the American Originals (and the Mexican-made Player Series), while 2017 introduced the more contemporary American Professionals. On to 2019, then, and we have the American Performer Series, which replaces and expands upon the previous ‘gateway’ American Specials.

Along with the usual suspects, we get some neat additions, such as the Mustang guitar and bass - the first US-made Mustangs since anyone can remember - along with a Jazzmaster that drops in a Strat’s vibrato, and the cool, if oddly named, Telecaster Hum: a neck-humbucking version of the standard Performer Telecaster.

Like Fender’s Specials that came before them, the Performers come in gigbags, rather than hard cases. The maple necks with either maple or rosewood fingerboards and alder-only bodies are made in Corona, but many of the parts - including the Strats’ vibratos - are Asian, just like the outgoing American Specials, for example. Like the previous Specials, the Performers also stick with the ‘Modern C’ neck profile along with jumbo frets. The bodies here are finished in gloss polyurethane (with a smattering of satin options), while the necks, including the headstock faces, are all satin polyurethane. A simple identifier of the new models is the silver-coloured 70s-era Fender headstock logo; the Specials had a black logo.

So, what’s new? Quite a bit, such as ClassicGear tuners that combine a mainly Kluson-like vintage-style with split head posts (all the same height) but no rear-placed screws. They attach in modern style with a nut and washer and offer an improved, greater fine-tuning 18:1 gear ratio and will also be available as spares.

Then there are the pickups, designed by Tim Shaw. The Performers swap the American Special’s Atomic humbucker and Texas Special single coils for new Yosemite single coils and DoubleTap humbuckers. The Greasebucket tone controls are kept from the American Specials, but are used only on the bridge pickup of the Strats and as a master tone on the Teles. Many of the Performers also have expanded switching.

This is the same as the recently-reviewed three single-coil model with the exception of the DoubleTap humbucker at the bridge. As a result, the function differs and the lowest tone control, when pulled up, engages a single-coil-split of that humbucker, voicing its screw coil. Like the standard Strat, tone 1 affects the neck and middle, and tone 2 the bridge, again using the Greasebucket circuit.

The maple fingerboard models come in either our gloss Black finish, shown above and opposite, or a satin Surf Green; the rosewood in a subtly metallic Aubergine and Three-Colour Sunburst. Aside from the black-faced three-ply scratchplate on our Black version, the others have a three-ply mint green scratchplate.

In comparison with the recently-reviewed Strat, the HSS Strat feels virtually identical. But where does that DoubleTap humbucker fit? It’s not a high-output ‘rock’ humbucker, but in humbucking mode, as supplied, there’s still a noticeable volume lift compared with the Yosemites and, obviously, a thicker humbucker voicing with more rounded highs. The single-coil voice still sounds not only lower in output but thinner and a little on the shrill side in comparison. Back off the tone and things noticeably improve, but then switch back into humbucker mode and the sound is darker until you restore your tone setting.

Pickup height adjustment dials things in a little, and with those two screws on the base side you can either follow the angle of the strings or apply a slight tilt. The problem is, if you pull down the pickup in humbucking mode to reduce that volume lift, when you switch to single coil it’s even thinner. And vice versa, you can dial in a slightly stronger single-coil voice, but then the humbucker mode dominates. It’s always a tricky balance and perhaps the compromise lies in running it as a three-single-coil guitar, then switch in the full humbucker as you kick in an overdrive or change an amp channel. It worked for us.

Any new mainstream guitar launch - not least one by the big guns - gets many a player hot under the collar, and the American Performers will have garnered plenty of forum inches by the time you read this. At pretty much the same price (full retail) as the departing American Specials, the American Performers seem fairly priced with their numerous upgrades and there’s little to disappoint. Additional features such as the ClassicGear tuners are excellent additions, but it’s the new pickups that we suspect might be the main discussion points.

The problem here, of course, is that we all have a different idea of a ‘great’ Strat or Tele sound and one pickup or set simply won’t suit every player out there. How can it? The almost enhanced sparkle of the Yosemite single coils is rather addictive, especially if you’re the sort of player who’s using a more modern signal chain, not least one with programmable effects.

Balancing humbuckers with single coils is never an easy task and on Stratocaster HSS you should be prepared to use the volume and tone controls - again, setting up specific patches on your Helix and the like maximises the potential and recording with these is a breeze. The last thing we thought we needed was another Strat, but this American Performer got under our skin and got the majority of our play time. Enough said.