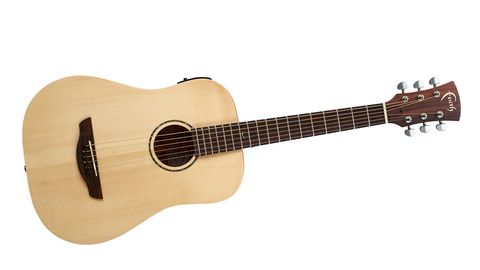 A fine choice of travel guitar, but not quite on the level of the all-mahogany version.

Travel guitars are so ubiquitous these days that when we found out Faith had introduced a couple of new models we were actually extremely surprised to realise that the company hadn’t done so already.

It’s easy to see where the appeal would be, though. Faith has built an enviable reputation based on incredible value for money thanks to all-solid construction and designs by renowned luthier Patrick James Eggle.

If even half of the quality and class of the full-size models could be distilled into a more portable package, then that would definitely be something to get excited about.

It’s always a good sign when a travel guitar comes supplied in a high-quality gigbag. It shows that the maker values the instrument in its own right and doesn’t see it as “just” a scaled-down version to fill a gap in the product catalogue. We’d be very happy taking one of these on our travels, with it impressing greatly in terms of looks, durability and comfort.

Naturally, it’s what’s on the inside that counts though and this guitar makes a strong impression on first inspection. As the names suggest, the Mini-Saturn is based on Faith’s dreadnought design. At 590mm in scale length (compared to 650mm for a full-size model), the it is noticeably smaller but not so much as to drastically alter the playing experience, striking a good balance that allows Faith to retain proper string tension.

The playing experience immediately familiar and comfortable, compared to some other travel guitars we’ve tried, which have felt almost more like mandolins. It again adds a certain weight and authenticity to the guitars’ designs, reinforcing the sense that these are every bit as worthy as their full-size counterparts.

Construction-wise, the biggest and most obvious benefit this guitar has over just about every other travel guitar available is that it features all-solid construction, just like every other guitar in the Faith line-up.

Now, while the benefits of an all-solid construction aren’t quite as obvious on a shorter-scale instrument to that of a full-size one, there’s no question that this is a box that every guitarist likes to see ticked when they’re shopping around.

As you can probably tell from the photography, the Saturn pairs a mahogany back and sides with a spruce top. It sports a nicely applied satin finish and, like many travel guitars, lacks any binding. The Fingerboard is Indonesian rosewood and the bridge figured Macassan ebony.

It’s a compelling mix of tonewoods for sure, and the whole package looks attractive. They say the devil is in the detail and that’s certainly the case here, with the inlaid Faith logo, abalone rosette, rosewood heel caps and dual strap buttons making a ‘complete’ package. Indeed, if you saw the spec on paper, we think you’d be hard-pressed to tell if this was a travel instrument at all!

If all that wasn’t enough, Faith has also seen fit to include a nifty little electronics package with this mini marvel. The company has always been known for including quality components with their electro models but we think it’s safe to say you wouldn’t normally expect them on these smaller bodied instruments.

In this case, Faith has included its own proprietary CnR-3 system, which, for such a small unit, packs in a surprising amount of features. You’ve got a three-band EQ including bass, middle and treble sliders for precise tone- shaping control, plus a phase switch for sorting out any feedback problems on stage, a volume control and a built-in tuner with a beautifully crisp and bright colour LCD display.

It’s clear that this guitar has been designed with a great deal of care and attention. It is not a novelty item - it’s a serious instrument that match its full-scale designs as closely as possible while packing in some smart features and retaining that same level of build quality we’ve come to expect from Faith.

The all-solid construction seems to have done less for the depth of the tones on offer in comparison with the recently reviewed Mini-Neptune, and to our ears the spruce makes the guitar sound harsher in the trebles and more boxy than its counterpart.

Again, fingerpicking softens this somewhat and makes the tones more evenly balanced, but still not on a par with the all-mahogany version. Flatpicking was especially harsh, and if you wanted to go down this route we think you’d need to pick your pick carefully so as to coax the best out of the guitar.

Plugged in, the EQ helps to balance out any aspects of the tone not to your liking for a more rounded performance. We never expected top-shelf performance from a small, bespoke unit - but the CnR-3 does an admirable job, translating a superb acoustic performance into a decent electro one, particularly with a few choice effects to deepen the tones.

It’s impossible not to be impressed by the Nomad series. This guitar would make an excellent travelling companion or even a first guitar for junior players picking up the instrument for the first time. The build quality it utterly immaculate – every bit as attentive and impressive as the other guitars in Faith’s catalogue, and with just as many features to boot.

The value for money is top notch, too - it’s just a shame that the Mini-Saturn’s tones aren’t quite on the level of the aforementioned Mini-Neptune. If we were to personally pick between the two it would be an easy choice, but as always, it’s worth checking both out to make sure that the tonal palette fits with your style of playing before committing.

The Nomad series stands tall with the very best in its class. Faith has gone to more effort than any other maker we can think of, to make sure that their smallest instrument is every bit as wonderful as their most expensive - and that’s nothing short of remarkable.