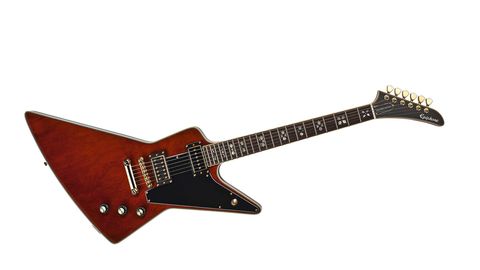 If the look appeals, you may well be surprised at where this guitar takes you - so much so we’d really like to see this pickup configuration on even more guitars.

Regardless of where you stand on Bring Me The Horizon, their steady ascendancy to festival headliner status is inevitable.

What hasn’t been so inevitable is their guitarist’s signature models. A closer listen to the band’s output since 2010’s There Is A Hell… reveals post-rock textures absorbing into their sound to form new dynamics amongst the heavy, riff-driven elements.

Yet Lee Malia’s first Epiphone signature Les Paul looked like something crafted by a fan of 70s rock. Where most ‘metal’ players may look to primary colours and humbuckers, Malia was searching for something more versatile. And his second collaboration with Epiphone takes that even further.

Despite being wielded by The Edge, and even Clapton at one point, the Explorer lends itself towards hard rock and metal, and with gold hardware, floral inlays and a walnut finish, the aesthetic is far more Skynyrd than Slayer - the former’s Allen Collins played one. The approach here won’t be for everyone but again we commend Malia and Epiphone for bringing something different to the table.

Like another classic Gibson design, the good ol’ SG, Explorers feel well-balanced on the strap. To an empowering degree - you’ll reach for the gain dial to ring out that open E powerchord. But there’s much more going on here than the usual rock heroics. The Explorer’s upper fret access really encourages chord shapes further up the neck and with the tonal range on offer here, those kind of new horizons might be where you find yourself heading.

There were a couple of issues that mar our test guitar on inspection. The setup is great for bends but also low enough to buzz across the board for anyone with all but the lightest touch, so downtuning gets flappy.

The biggest rub is that this guitar’s jumbo-style frets are in need of further polishing. It’s a shame to see sloppiness like this on a £700 guitar that is offering so much elsewhere. We hope it’s an isolated oversight.

There’s clarity and bite with articulation from this guitar’s bridge 84T-LM humbucker when soaked in gain. It’s great for Mastodon-esque arpeggio work in riffs, full-bodied with enough treble bite not to get too dark for clean Grohl-esque open-string chord strumming. If you’re already a P-90 convert, you’ll need no convincing with the neck pickup.

The girth of a humbucker with the edge of a single coil is a ballpark we’re happy to play in; in heavy climes think of it more towards Tony Iommi’s dark and inviting world. Saturated, this P-94 is a cloak of vintage warmth but dial back and there’s enough metallic physicality under gain to ring out for rock rhythm without getting mushy.  So far, so good, but we think the real story is the mid position.

Or should we say, positions. The P-90 / humbucker mid position is one of the great unsung tones for rhythm - you get the meat and the girth with openness and personality, plus a little bite. But the whole deal gets sweetened and sharpened by the coil-splitting on offer.

Engaged on the bridge, it unleashes a degree of spank that recalls a broader take on the mid position of a Strat, casting an even wider net with this versatile Explorer into blues and even funk. The coil split for the mid position is just right for bringing a little twang character to some of the moodier post rock-influenced clean work Malia employs in songs like Blessed With A Curse.

It offers presence and personality to single notes but it’s great for jangly mellow strumming and fingerstyle too, shaping to taste with the tone control. We’re not sure if we’ve ever encountered a middle position on a guitar that’s so addictive.

If the look appeals, you may well be surprised at where this guitar takes you - so much so we’d really like to see this pickup configuration on even more guitars. It covers a lot of ground - and its tone becomes the real story here - over its shape, aesthetic and where you stand on Lee Malia’s band. In that respect it’s a winner of a signature model.