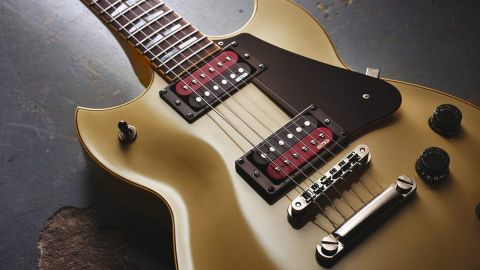 This provides one of the most intelligent blends of old and new that we’ve heard.

For too long there’s been a chasm between players who like their active pickups and those in the no-battery passive camp.

It’s been enhanced by the former being taken up by progressive and metal players - so if you don’t play metal you don’t need active, right? Imagine then a classic passive humbucker in construction, looks and sound married to an active preamp (on the pickup base) to reduce noise and provide  a low impedance output with volume controls that don’t change the pickup’s sound, just their output. Well, that’s the premise of EMG’s latest RetroActive range.

Available in three humbucking flavours and two single coil-sized styles (prewired to a scratchplate) we received a set of the Fat 55 humbuckers (with Alnico V magnet at bridge and Alnico 2 at neck), which are available singly or as a set with black or zebra bobbins or a red/ black bobbin combo for those who don’t want to blend into the past.

Compared to the standard EMGs, like the most ‘classic’ 57/66 set, which retail at £183, they’re cheaper too (although, at present, there are no covered options).

We can’t remember fitting a set of pickups without warming up our soldering iron but, as we’d previously stripped our carrier (a Yamaha SG1820) of its electrics with the exception of the three-way toggle, that’s exactly what the deal is here.

Pickups and pots connect with push-on connectors, likewise the output jack and battery clip, while the wires from the toggle switch are screwed into the pickup bus. Clear diagrams for a variety of guitars mean installation is simple for any basic-level modder.

As ever, you need to make sure  you have space for a 9-volt block battery (which offers around 1,400 hours of play time) and that slightly smaller pickup bus. Plus, remember to order either long shaft or short shaft pots for Les Paul style guitars or Strats respectively.

To be honest, we were surprised. These don’t sound like active pickups - imagine Duncan’s ’59s but with zero noise and volumes that adjust level without altering the voice, plus no capacitance roll-off or loading on the way to your pedalboard or amp.

It creates a set that seems hugely versatile, especially with the four-control setup we are using - clean, classic no-mush jazz voices to ringing clear jangle, woody overdrive without high-end ‘tizz’ or fizz, and a pretty classic output that doesn’t fry the front end of your amp.

EMG isn’t the only maker combing passive and active styles - Seymour Duncan’s Duality is another example. But, the classic appearance, idiot-proof no-solder installation and the very passive sound with the benefits (not pitfalls) of active via their discrete preamp make these pickups a joy - especially for the player who has to cover a lot of styles from jazz to classic rock and beyond.