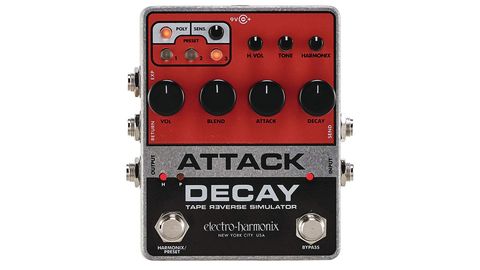 This is a pedalboard secret weapon that’s a whole lot of fun.

Back when all recording was done on analogue tape, the only way to get a backwards-sounding guitar solo recorded was to turn the tape over, so you’d hear everything played backwards then overdub a track of normal guitar.

When the tape was then played back normally, that overdubbed guitar would sound backwards - namely, with its note envelope reversed. A cool effect undoubtedly, but a bit of a faff to execute. And how would you be able to replicate the sounds on stage?

Well, Electro-Harmonix came up with a solution in 1980 with the Attack Decay Tape Reverse Simulator pedal, which offered that reversed tape effect as well as bowed sounds and volume swells. The original was only in production for a couple of years so is very rare and commands high online auction prices. But now, almost 40 years on, EHX has brought out a new version at a very tidy price.

The new pedal still does what the old one did, which is one new envelope at a time (the volume envelope re-triggers every time you play a note). However, modern technology derived from the HOG2 has also endowed the pedal with a Poly mode so that any note you’ve played doesn’t immediately cut out when you play a new one. Instead, you get separate volume envelopes for every note you play, opening up a new range of flexibility. You also get a (separately footswitchable) built-in fuzz with a full set of controls, a practically implemented effects loop, three easily recallable user presets, and the option of plugging in an expression pedal to control every knob.

Your input signal goes through the Attack envelope followed by the Decay envelope, both of which have a range of adjustment from four milliseconds to eight seconds. A Blend knob mixes dry and effected sound, so to get a full volume swell from silence it should be set to its extreme, although rolling it back can give some interesting sounds where you get a full note attack leading to a swell. In Mono mode you get a fresh volume swell each time you strike the strings, and, while you could use a volume pedal or manipulate your volume knob for a similar ‘violining’ effect, the speed and consistency you get with the pedal imposing the same envelope on each transient is something else again - and quite special.

With the Attack at about 10 o’clock and a short decay, we’re able to get a really cool backwards tape effect. Turn up the Decay and long sustained swells are possible, greatly enhanced by switching in the built-in fuzz, its Big Muff heritage (especially the Tone knob) giving you a wide range of options for textural flavour. It’s not all about swelled attack, though: keeping it low and turning down the Decay knob can give you short staccato sounds reminiscent of certain Eastern stringed instruments and even a banjo.

Poly mode isn’t quite so straightforward, though, in that it can produce a much more disparate range of sounds. With the Decay envelope turned off, we’re able to create some lovely flowing arpeggios where the swelled notes cascade magically into each other and (with fuzz engaged) cello-like sounds in the lower guitar range. Using just the Decay envelope yields a range of staccato notes with a metallic flange-like quality. Enabling both envelopes in conjunction, the two worlds collide creating new artefacts for an assortment of weird and wonderful hybrid sounds that really have to be heard rather than described, but are musical through and through.

Besides the basics, the pedal also has a raft of secondary functions, such as setting up the bypass knob as a switch that triggers an envelope each time it is pressed or using the Blend knob to create hybrid dry/fuzz sounds and so on. The one that really grabs our attention, though, is Continuous Envelope mode, which automatically restarts the attack envelope when the decay envelope finishes. This results in a tremolo effect with Attack and Decay knobs setting tremolo rate and waveshape, from rounded pulsing to percussive sequenced stutter.

This is one revamp of a vintage Electro-Harmonix pedal that a lot of people will be happy to see. If it did nothing but that reverse tape thing it would be worth the money, but its creativity goes way beyond that to deliver a wholly impressive range of sounds.