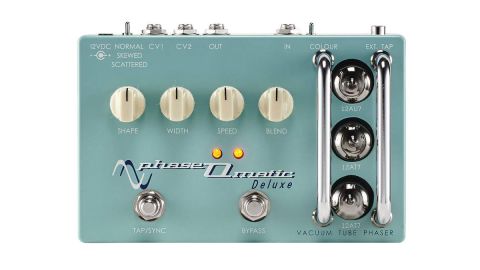 If you want intricate subtlety in shaping bespoke phasing sounds, then Effectrode’s offering may just be the one for you. Massive range of phasing sounds.

As we saw n our review of its Delta-Trem, Effectrode is a British company specialising in pedals that use valve technology.

The company has also recently revamped its Phaseomatic Deluxe, which was originally released in 2009. The most notable update to this latest incarnation of the photo-optical phaser is the addition of a fourth knob labelled Shape to adjust waveform shape - selected from three toggle-switched banks of 16 - that joins the Width, Speed and Blend trio from the original unit.

From that toggle switch, you get the Normal symmetrical linear sweep waveforms, a selection of Skewed lopsided waveforms, plus the Scattered bank’s set of harder transition, stepped and pulse waveforms. Those waveforms contribute to a really wide range of phaser flavours, but the main building blocks are the unit’s twin LFOs, which present the feeling of having two phasers in one box. When sync’d (with an internal jumper) to run at the same modulation sweep rate (Speed), it’s easy to conjure up a wide range of phasing sounds because the knobs work on the two LFOs simultaneously. Standard mode is a little trickier to master because the LFOs run independently and you have to hold down the Tap/Sync footswitch to access LFO B’s Speed, Shape and Width knobs. The reward, though, is a massive range of possible sounds.

From the gradually changing tonality engendered by extremely low sweep rate, through to fast bubbling rotary speaker-style sounds, lies a plethora of dimensional effects to be explored, all delivered with real clarity and warmth as the valve circuitry does its thing. For more intense phasing, a Colour switch can introduce resonance (feedback) from either the fourth phase shift stage or the subtler-sounding second stage.

Here the phasing can get more chewy, have a more pronounced ‘wow/wah’, and even get you into analogue synth realms. This extra emphasis works well if you’ve dialled in a nice interaction between waveform Shape and Width, and want the effect to be more blatantly rhythmic. With such sounds, keeping in time with a specific tempo is no problem with the always-active tap tempo footswitch. There’s also provision for a couple of expression pedals to control speed and width for more onstage artistry.

If you’re after an easy-to-use phaser, classic single-knob options are available from MXR and Electro-Harmonix. But if you want intricate subtlety in shaping bespoke phasing sounds, then Effectrode’s offering may just be the one for you.