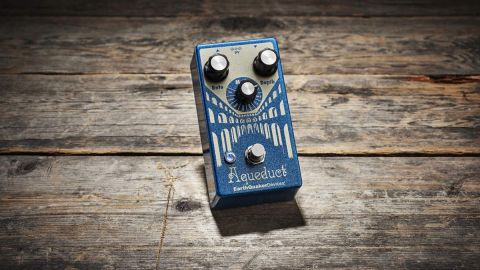 One of the most interactive, inspiring and intuitive of modulation effects to appear in sometime - if you can think of a way to make it wobble, it probably will.

While some of EarthQuaker’s current 42 pedals are concise, modern refinements of classic vintage sounds, many others - including this Aqueduct vibrato - have virtually kidnapped conventional analogue wisdom and given it a RoboCop-style digital makeover.

With the Aqueduct vibrato, EarthQuaker hasn’t so much ‘reinvented the wheel’ as ripped the axle off and replaced it with turbojets.

That age-old effect, the humble vibrato, has migrated from our fingers to whammy bar, to amp, to analogue pedal, and has now arrived with a digital superbrain - meaning it does way more than merely replicate a woozy old Magnatone. We hasten to add it does that thing very well (think chorus without the dry signal), but that’s very much just scratching the Aqueduct’s watery surface.

There are two standard controls when it comes to vibrato: rate and depth - how quickly and how much the pitch is modulated up and down by an LFO (low frequency oscillator). The typical LFO in a vibrato circuit will have a sine waveshape, and this smooth, familiar bobbing sound is the first of the Aqueduct’s eight vibrato/ waveshape modes. Move the rotary mode selector switch anti-clockwise to the next position, Triangle, and things suddenly get very choppy. At this point, the Aqueduct already feels like unfamiliar waters - and that’s just the beginning.

Moving on to Ramp and Square modes, the overall effect intensifies and becomes overtly rhythmic in nature. Subsequently, using these less subtle LFO waveshapes calls for a more reactive approach to playing. The next mode, Random, is a law unto itself and requires a sturdy set of sea legs to explore with, but its experimental ‘vibe’ should be enough to prise most guitarists out of their comfort zone.

The Aqueduct’s pièce de résistance, however, is its three ‘Envelope-Controlled’ modes of Rate, Depth and Pitch. This ability to interact with the effect by way of playing dynamics is a functional masterstroke of originality and is bound to push players into new areas creatively.