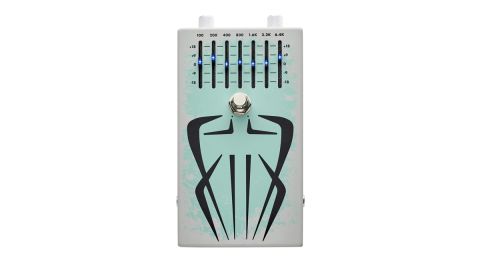 ZZ Top fans will love it anyway, but there’s plenty here for anyone who wants to get down, dirty and downright nasty with their fuzz tones.

It’s common knowledge that back in 1968 ZZ Top’s Billy Gibbons got to spend a lot of time with Jimi Hendrix while Billy’s then band, The Moving Sidewalks, were opening support on The Jimi Hendrix Experience’s first headlining US tour.

One thing that came out of that was Billy’s introduction to octave fuzz in the form of Roger Mayer’s Octavia. That octave fuzz effect became a favourite and he still uses it to this day together with a seven-band graphic EQ to sculpt the tone.

Now, endorsed by Billy Gibbons, Jim Dunlop/MXR has combined both the octave fuzz (with circuitry based on its Jimi Hendrix Octavio fuzz) and a graphic EQ in a single pedal.

The Siete Santos appears to take its styling cues from a late-60s Roger Mayer pedal with a wedge-of-cheese shape and weighty construction that could see it used as a doorstop if you retire from playing. The sharp-dressed pedal’s only drawback is that the front-mounted Fuzz and Level knobs are not the easiest to set, but many users will have them down as set-and- forget knobs anyway. By contrast, the seven sliders for the graphic EQ on the top panel are easy to access and are lit up with individual blue LEDs so you can see your settings at a glance.

Those EQ bands cover all the salient areas of guitar/amp tone with a range from 100Hz to 6.4kHz; each has up to 18dB of cut or boost. Starting with their centre detent positions, we hear a bright gritty fuzz, but the beauty of this is that you have a tonal choice, whether that be a neat V-shaped scoop or getting an individual slider to do its own thing.

For example, you can push up 100Hz and 200Hz to round out and fatten up the low-end, make things nasal by pushing up 800Hz and especially 1.6kHz, and get all gnarly and nasty at 3.2kHz. The essential fuzz, though, apes the vintage design with that upper octave bedding in just right like a ghostly overtone.