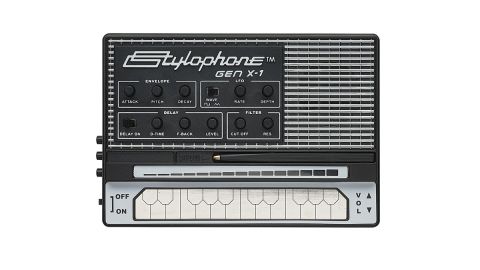 The Stylophone adds a thoughtful set of synthesis basics to make a useful, creative instrument for fans of the original’s unique tone.

There’s no mistaking the sight and sound of the Stylophone, but after many years, the stylus based mini-synth has been - dare we say it - enhanced.

The Gen X-1 adds sub-octaves, PWM, delay, a low-pass filter, a pitch/filter envelope and a Soundstrip. You may be wondering if a reboot of such an idiosyncratic icon is such a good idea. Well, we’ll save time and cut to the end; it’s still fun and creative, but a whole lot more so.

The main reason is that the essential quirky Stylophone sound and slightly awkward playing method (the wired stylus) remain untouched, whilst the new additions are in keeping with the sonic aesthetic of the original - ie scratchy, distorted, buzzy and oddly endearing. First off there are three new ‘voicing’ buttons: -1 octave, -2 octave and PWM. The first two add some heft and depth bring the Stylophone into the world of bass. When played through something other than the tiny inbuilt speaker, it possesses some credible low end weight.

The PWM is a nice touch and adds chorus/ensemble richness to the essential insect tonality. The PWM rate is controlled by the LFO, which also affects the pitch and filter cutoff via its Depth knob. The LFO has triangle and square wave oscillator shapes, and the oscillation speed range is just what you need, though it stops short of ring-mod style silliness. The adjacent Envelope section consists of Attack, Decay and Pitch knobs.

The AD envelope affects the low-pass filter in the first instance, with the Pitch knob dialling it into the oscillator(s). This is where the Gen X-1 crosses into a new creative realm offering myriad synth FX noises (sirens, bleeps, bloops, beeows, etc), which coupled with the LFO and extra oscillators (don’t forget the big pitch dial at the back) makes for a lot more contact time.

Last but by no means least, we have the Filter section, with its simple Cutoff and Res knobs, and the Delay. First off, the low-pass filter is no Moog Ladder design, but its quality and resonance befit the Stylophone context. It adds fun and colour to the palette, which is further advanced by the Delay, with its D-Time, F-Back and Level knobs. Yes, it’s grainy and lofi; yes, it feeds back and makes a mess;  but it’s really, really fun.

Oh yeah, we nearly forgot - while you’re tweaking the knobs, why not ditch the stylus and just sweep a digit along the new Soundstrip, a ribbon-style controller. Added together, these additions make the Stylophone more instrument or sound design tool than musical toy. The line input (Aux) also makes it an FX unit as the incoming signal passes through the filter and delay, which is well worth exploring.

Where Stylophones previously were played for a day then relegated to the cupboard to be pulled out when creative juices ran dry, we think the Gen X-1 could well break out of the cupboard and live atop an effects rack or synth stack ready for the next time grown-up gear just leaves you cold. It might be three times the price of the basic Stylophone, but we reckon it’d see more than three times the action.