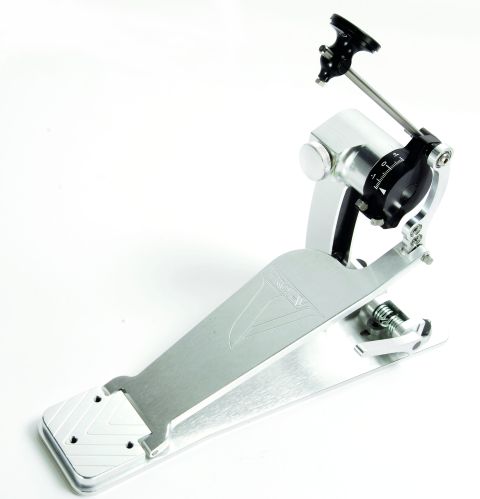 The refreshingly easy manner in which you can set up and alter the feel of the Pro 1-Vs makes them of real interest to anyone with a pocket to cope with the prices. Ah, the prices. Yes, these are enormously expensive propositions, but cutting-edge design and engineering never came cheap - so whether the resulting feel and bomb-proofness is worth stumping up for is between you and your overdraft.

Wow. Look good, don´t they? Believe us, they´re even more impressive in the flesh. Initial aesthetic impressions are of a cross between precision measuring devices and surgical implements. But these are ‘just´ bass drum pedals. So let´s not get carried away, shall we?

After all, it won´t do to be blinded by the level of, ahem, trickery present in Trick´s Pro 1-V pedals - the CNC machining, the stealthy appearance, the innovative design. These units are going to have to earn their living battering the hell out of a kick drum, responding to every flex of both feet. Good looks are only going to get the Pro 1-Vs so far…

For starters, the pedals are driven by internal compression springs rather than the typical expansion springs. Trick cites faster ‘recycle´ time and energy efficiency as the reasons behind this. It also means that there´s no increase in tension as the beaters approach the head, as you´d normally get with a spring that´s working more and more against you as you stretch it, which in turn means a more consistent feel across the full range of travel.

The use of compression springs has also allowed Trick to build in a design feature that allows for extremely quick and easy tension adjustment. You see those big knurled knobs on the top of the left hand side of the Pro 1-V´s frames? Grab hold of them and give them a turn in order to firm up or slacken pedal feel. It´s that simple.

That´s just the beginning of the cleverness. The pedals also have split cams with a useful degree scale marked on each side, which makes for pretty accurate adjustment of both the pedal and the beater cams. In practice, this means that both beater and pedal angles can be tweaked to suit with the minimum of fuss, and used in conjunction with the Pro 1-V´s ‘adjustment cluster´ it makes for a remarkably tailor-able unit.

"Luddites might get sniffy about such outré design, but there´s no doubt that much of the Pro 1-V´s snazziness simply serves the playing purpose rather than being flash for flash´s sake".

Ah yes, the ‘adjustment cluster´. That´s the section at the end of the footplates that attaches to the beater cam and looks a bit like a knuckle duster. For villains with only three fingers, clearly.

Playing around with the settings here simply involves loosening and removing a single bolt and replacing it in another notch of the cluster, thereby increasing or decreasing the speed of response. Add to all the above the low-profile machined billet aluminium beater heads that can be positioned anywhere along the beater´s titanium shaft, the silent operation and the 12,000 PSI rating of the footboard itself and the Pro 1-V presents itself as a very full-featured, truly ground-breaking unit.

The Pro 1-V double is, well, doubly so. Essentially two Pro 1-V singles coupled together, there´s less of a sense of the left-hand pedal acting as a ‘slave´ unit. Trick even manufacture a ‘double-up´ kit to convert your single into a twin-foot machine should you decide you want to do a Vinnie Paul.

Dyed-in-the-wool luddites might get sniffy about such outré design, but there´s no doubt that much of the Pro 1-V´s snazziness simply serves the playing purpose rather than being flash for flash´s sake.

The first thing that really makes an impression is just how user-friendly the set-up is. Instead of having to reach for a drum key to faff about with adjustment, most of the important, most regularly accessed functions involve just a grab and a tweak. You can also transform the feel of the pedal from your stool without having to get down to the level of the pedal. Mid-gig tailoring of response has never been easier.

Although the hi-tech looks might subconsciously suggest that the Pro 1-Vs are for metalheads alone, such is the scope for adjustment that no matter what kind of feel you´re after it is more than likely to be within the remit of the units (unless of course you crave that increasing resistance of a standard spring set-up). Directness of response and consistency of pedal feel is remarkable and the Pro 1-Vs feel as though they´re attached to your brain rather than your feet. If you think it you can play it. Well, sort of…