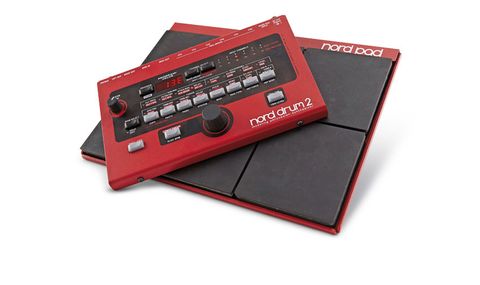 The upgraded features of the new drum synth means it is now a serious musical instrument.

Back in 2012, Swedish keyboard giant Clavia produced its first electronic drum since selling off the ddrum brand. The Nord Drum is a 4-channel drum synthesizer module which generates its 'virtual analogue' sounds via electronic synthesis rather than the more common sample-based methods.

The Nord Drum 2 looks very similar to the original model, retaining the familiar red and black livery, plethora of push-button controls and the infinite rotating parameter dial. It is slightly larger and the rear panel is now loaded with sockets. The 'virtual analogue drum synthesizer' subtitle has been changed to 'modelling percussion synthesizer' - a strong hint of its second generation potential.

Nord has kept to the basic fundamental building blocks of sound with Click, Tone and Noise, however there are many new waveforms and filters (including high pass), and a range of comprehensive mix facilities. A free downloadable sequencer app for the iPad turns the Nord Drum 2 into an extremely powerful package.

There are many enhancements on the new drum synth including three methods of synthesis, stereo output (lacking on the Nord Drum), and several new tone parameters. One significant tone parameter is 'Spectra' which allows independent tuning or stretching of certain components within a waveform.

The manual suggests one example being the tuning of the 'head' which alters the pitch without it affecting the fundamental sound, like that of a real drum. We are now treated to six inputs on six separate real-time synth channels and Nord has also included the much-needed 'Phones' and an intriguing Ethernet socket. This standard Ethernet socket is nothing to do with network connection, but is used exclusively for the new, dedicated Nord Pad which we also have here for review.

Like the Nord Drum 2, the Pad has a red steel casing but the black comes courtesy of the six rubber pads which are glued into position over each of the six transducers. To the rear of this compact laptop-sized box, we find the Ethernet socket - however the only device it will connect to (at present), is the Nord Drum 2. The six pads take full advantage of the six individual synth channels on the module and there's no need for a power supply - simply plug 'n' play.

Though the Nord Drum 2 can accept trigger inputs from a variety of pad sources via its six 1⁄4" jacks, for the review I am using the Nord Pad and connecting it to the module with the supplied CAT 5 cable. The four inputs on the original Nord Drum didn't quite feel enough, now with six channels we can configure the pad with a full kit of kick, hi-hat, snare and toms or some tuned percussion such as a marimba or xylophone. Six channels give you less than an octave to play with but it's more powerful.

Pulling up the sounds from any of the eight sound banks (four user, four factory set), instantly loads tuned percussion and fantasy noises/sounds into the Nord Drum 2. Here we can begin to play around and have some fun, with the pad configured to play six timpani of different pitches. The kit sounds and tuned percussion are highly convincing - you are actually fooled into thinking somewhere in the background there is a sample of the real thing!

The repeat function which can be set to bpm, provides a beat or rhythmic pattern while playing around with other sounds. Some low-end noises or drum sounds chuntering away while we blitz around the pad is both musically satisfying and great fun. You are not just limited to the original sound triggered for the 'repeat'; the sound may be altered and played around with in real-time.

Adding certain filter effects and a variety of tones (all in real time), can be used during a performance with a sequence of repeats, or when playing the pad with one hand and altering the parameter with the free hand or using a sequencer. Think of early Porcupine Tree tracks, the noises, buzzes and drum sounds of Kraftwerk, Human League or even some Floyd and you won't be too far out.

Listed simply as an 'accessory', the compact Nord Pad is a worthy piece of equipment. Though connection is limited to the Nord Drum 2 alone, via MIDI it can be used to trigger other devices. Add a sequencer to the set-up (such as the Nord Beat 2), this becomes a powerful sound and rhythmic creation tool.