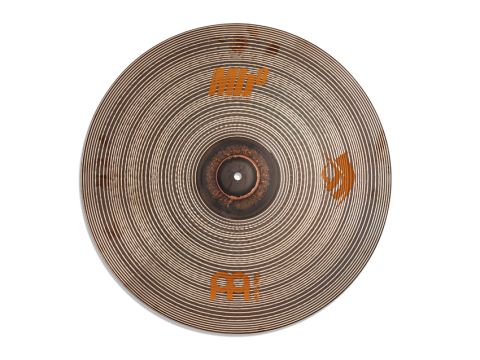 Although this cymbal has plenty of muscle for metallers, it also demonstrates its ability with music which is less intense and more subtle.

Mastodon's drummer, lyricist and arranger Brann Dailor has worked in close collaboration with Meinl to produce the Ghost ride.

Brann insists his new Ghost is not the least bit scary, instead describing the Meinl metal as a cymbal with "just the right amount of everything".

Like all the cymbals in Meinl's MB8 range, the manufacturing process for the model starts with pre-cut discs prepared from a standard B8 alloy. The discs are then heated and pressed, giving the cymbal its basic shape while also creating the 'hammering' effect. However, before the bell is shaped, additional heat is applied on this area to make the metal more malleable.

After shaping, the Ghost ride is subject to some more flames, but this time it undergoes a rather
wicked chargrilling - a process which creates a 'cast' oxidation tinge. Many cymbals are lathed to create their shape and thickness, but as this model already meets these requisites, any lathe work is for decorative purposes only.

This lathing starts away from the base of the bell, spiralling out a few centimetres, eventually joining into
a complete circle. The lathe scribes then form rings around the circumference of the upper and lower cymbal surface in tasteful batches down to the cymbal edge. There are several logos dotted around the
cymbal surface, which are either laser-etched or
printed in a subtle orange.

A selection of subtle strikes from the stick tips around the bow centre produces a clear glassy 'ping'. Once the initial hit has cut its course, there is a pleasant low-level sustain, reminiscent of a coiled spring-type chime on a clock.

Further and more intense wrist exercise conjures up a solid wash that's maintained even with fairly lazy strokes. Altering the position where these strikes are placed controls the resulting wash significantly.

The pitch is much higher when hitting close to the bell, with a reduced but higher-pitched wash. Hitting further out towards the edge demonstrably alters the pitch and wash intensity.

Even though this can be quite powerful, at no time does it overpower any subsequent stick strike. Walloping the edge causes the cymbal to rise quickly to a 'crash' and just as rapidly when 'choking' leaves behind a fantastic high-pitch harmonic. Giving the bell some stick-shoulder whacks turns this ride into an amazing tool for indelibly imprinting the downbeat on any piece of music.