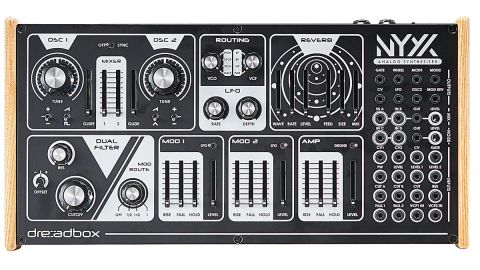 Dual filters and some great routing, modulation and patching possibilities make this more than just another semi-modular

NYX 2 is a compact semi-modular monosynth equipped with a 30-point patchbay. Desktop analogue synths aren’t in short supply these days, and semi-modular patchability seems to be the height of fashion; even within Dreadbox’s own range, the NYX 2 faces competition from the similarly sized and spec’d Erebus.

So what has this updated NYX got that makes it stand out from the crowd?

As with the first generation NYX, the main USP is the dual analogue filters, which come with a broad range of routing options allowing for some interesting sound design possibilities.

There are two oscillators feeding into these two filters and – thanks to individual pitch inputs – these can be played paraphonically, so there’s scope for interesting combinations of how the oscillators are controlled and routed through the filters and the rest of the synth’s audio path.

Each of the two oscillators can be set to one of two wave shapes. Both have a saw wave mode, but Osc 1 can also be set to a pulse wave – with pulse width modulation available via the patchbay – whilst Osc 2 has a triangle as its secondary mode. Each oscillator has a three-octave selection switch, plus a good-sized tuning rotary for fine pitch adjustments of +/- 12 semitones.

There are individual glide controls for each oscillator, plus level sliders for each in the mixer section. A switch above the mixer can engage sync between the two oscillators.

The NYX 2 is also equipped with a white noise generator that is only accessible via the patchbay, where it has its own small level control. This noise source is fairly loud though; dialling in just a little level results in quite dominant noise presence, even with oscillators turned up to high in the mixer. I found myself turning to an attenuator in order to dial in slightly subtler levels.

Paraphonic operation can be controlled in one of two ways. Firstly, using the DIP switches on the rear of the unit it’s possible to switch between duophonic and unison modes, the former allowing the two oscillators to be fed individual notes via the standard MIDI input.

The second method for paraphonic control is to use the individual CV inputs for each oscillator’s pitch in the patchbay. There’s a separate gate input here for triggering the envelopes independently of any incoming notes, and the VCA can be set to an always-open ‘drone’ mode, giving more flexibility when it comes to creating weird paraphonic textures and two-note chords.

The dual filters are both 12dB/oct. They share a single cutoff and single resonance rotary between them, but there’s a bi-directional offset dial for adjusting the cutoff point of the second filter relative to the first. The relationship between these two filters, and where they sit in the signal flow, is dictated by a trio of routing controls.

The NYX 2 has two routable rise/fall modulation generators, plus an additional generator for the VCA. The final routing control dictates how these mod sources interact with the cutoff of each filter. There are three options here, along with the ability to disengage modulation completely. The first mode has the two generators modulating the filters separately – ie Mod 1 modulates Filter 1, Mod 2 controls Filter 2. The second routes both modulators to both filters simultaneously, whilst the third has just mod 1 routed to the two filters.

If this all sounds a little complicated, that’s because it is; between these three routing selectors, there’s a hefty assortment of signal path and modulation combinations.

As a result, there’s a lot you can do with the NYX 2 – from arranging the two filters in serial LPF to combine the 12dB filters into a single 24dB filter, to routing the oscillators and filters independently for weird, modulated paraphonic fun.

The filter resonance can be pushed up into self oscillation too, and combined with the offset control this means it’s possible to get two pitched tones from the dual filters simultaneously. Doing this with the oscillators routed to bypass the filters is a seriously fun tool for creating weird effects and glitchy rhythms, allowing up to four pitched elements tuned and modulated separately.

The modulators themselves are loopable three stage envelopes with slides to control Rise, Fall and Hold stages, plus another to set the overall level. Engaging the ‘LFO’ switch on each of these will cause the envelope to loop and act, as the labelling implies, more like a shapeable LFO.

The NYX 2 also has a dedicated LFO with rate and depth controls, which is primarily used for applying vibrato to the oscillators. It can be routed elsewhere via the patchbay.

The one slight variation with the modulators is in the case of the VCA envelope, where the ‘LFO’ switch is labelled ‘Drone’. In fact, this functions the same as the other modulators, causing the envelope to loop without retriggering – raising the Hold parameter will create a true drone without any amplitude modulation at all.

There’s also a further Drone Mode feature available for the NYX 2 available via the back panel switches, which turns the Glide sliders into course tuning controls, for better hands-on pitch control without the use of an external MIDI or CV input.

Beyond a few minor control panel changes, the main differences between this NYX and its predecessor are the updated reverb (see left) and the expanded patchbay. This latter element doubles the original’s 15 points to 30, adding some interesting new features in the process.

The most noticeable of these is a new mixer/ attenuator, which can sum up to four inputs with an overall output level control. There are also now individual CV inputs for the cutoff of each of the dual filters. The audio input has been moved from the rear panel (swapped for an additional headphone output), and instead the patchbay has two inputs allowing audio to be fed into Filter 1 and Filter 2 separately.

These inputs open up some fun creative possibilities; feeding static or found sounds into one of the filters can create great results and, as outlined in the manual, it’s possible to re-route the second oscillator to create really meaty, thunderous bass sounds.

In all, the NYX 2 is a pleasantly weird and creative instrument. It can do meaty analogue monosynth sounds but it’s best when pushed into more unusual territory. Applying the wealth of modulation tools to the filters and oscillators is fantastic for creating odd, rhythmically complex loops and, for my money, the NYX 2 is at its best as a tool for drones and unique FX.

Particularly coupled with the onboard reverb, there are some great atmospheric sounds available here. This isn’t the cheapest synth in its category. However, since it can do both straightforward synth sounds and more esoteric experiments, it is a good buy – and has the makings of a synth that you’ll be finding new uses for for years to come.

MusicRadar verdict: Dual filters and some great routing, modulation and patching possibilities make this more than just another semi-modular

"Nyx 2 is not going to be for everyone, that’s for sure and with that mighty reverb, you can still see its appeal being more to experimental and ambient composers." MusicTech