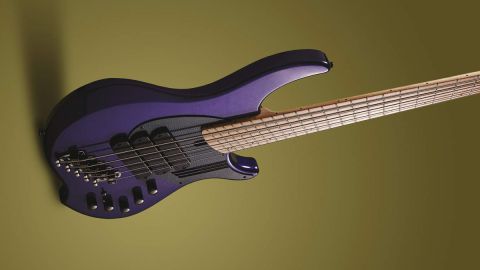 An impressive addition to the Dingwall roster.

The NG2 has been quite a success for Sheldon Dingwall and his team, and as good as that model is, Dingwall had the foresight to equip it with an extra pickup cavity (yes, check under your scratchplate) so that bassists in search of more tones could add another pickup or reposition the existing units.

The NG2 is still available, but with an extra pickup comes the NG3, with a whole array of extra tones for your delectation.

The NG3’s smooth body lines, extended upper horn and deep lower cutaway make for a very comfortable, accessible instrument; access to the upper frets is unhindered. The Moca Purple gloss finish is particularly eyecatching against the light blonde maple neck and fingerboard; on closer inspection, the colour has a subtle sparkle to it, continued on the matching headstock facing.

The alder body sits well against the player, although the long neck, extended range, and additional timber weight of a five-string bass means there is a slight balance overhang towards the headstock. On a strap, this is rectified.

The setup is exemplary and the standard of fret finishing very good indeed. Small black position markers adorn the lower side of the fingerboard, replicated on the fingerboard edge. The graphite scratchplate and chrome hardware give the bass a distinctly modern vibe, while the controls, pickup layout and monorail bridge units give the bass a busy look - but don’t misread ‘busy’ as meaning ‘complicated’.

Hipshot hardware has been used throughout, so weight issues are kept to a minimum from that side. The easy-access magnetic battery cavity cover is still in place, and the neck pocket is supremely tight. The trademark ‘V’ control layout still works well, with controls for volume, pickup selection, bass, low-mid and high-mid courtesy of the Darkglass Tone Capsule circuit, all of which is augmented with an active/passive selector switch.

With the EQ set flat, the job of auditioning each hum-cancelling neodymium pickup begins with the bridge unit, where the sonic display is punchy, bright but not particularly glass-like. The Darkglass circuit, particularly in its effect on the mid frequencies, gives the NG3 a different voice compared to a standard bass/mid/treble equipped instrument, but it’s no worse for it.

With position one established, position two takes the bridge and middle pickups and runs them in series, which supplies an approximation of a Stingray tone. With plenty of bass and low mids, the gritty response you might expect is there but with an added degree of smoothness.

Position three utilises the bridge and neck pickups in parallel to give a response similar to a Jazz; there is a noticeable tonal difference compared with the previous selections; the clarity you would associate with two single-coil pickups is very much present. Position four is the neck pickup soloed, and a fine, Precision-like job it does too.

The third pickup gives a rounder, smoother tone compared to that of the NG2 - which is exactly why some users were making this modification themselves. In practice, it’s something of a no-brainer, and despite the price increase between the two models, the extended tone range is helpful, giving you a good selection of familiar sounds within the core Dingwall/Darkglass range.

The NG3 is supremely playable after much refinement at Dingwall HQ; despite being a five-string, the 19mm string spacing, extended range and balance combine to create a smooth and enjoyable playing experience.

The additional pickup is a worthy addition, the extra tonality makes sense, and the price is far from prohibitive. Considering the overall package and what the NG3 has to offer, there isn’t much to complain about. Less Purple Rain, more like Purple Reign.