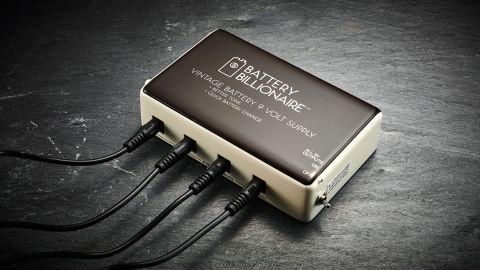 The Battery Billionaire is perhaps a bit specialist, and of questionable interest to many players, but others will see its advantages and regard it as a more practical purchase.

How do you power your pedals? Do you use a mains-powered power distributor to keep them all supplied or do you rely on individual batteries for some or all of them?

Or, how about a battery-powered power-distribution unit that can supply the juice to four pedals? That’s exactly what Danelectro has come up with as a partner to the Billionaire pedals, although it can be used with any pedals that take a 9-volt supply and don’t need a massive amount of current to function.

The Battery Billionaire puts four PP3 batteries in one neat metal enclosure, not much bigger than the four batteries laid side by side, with short connecting cables to reach your pedals’ power sockets. The batteries are accessed by a lid that hinges back easily when you open it, but is kept firmly in place with magnets when closed. A small toggle switch at one end turns off the power from all the batteries at once.

The main point of the Battery Billionaire is that you don’t have to undertake the often-fiddly and time-consuming task of opening up the individual pedals to change batteries. That’s especially useful for pedals that require a screwdriver or any that are Velcroed to your pedalboard. It’s great to have all your batteries in one place and easy to access.

The second point is pedal batteries generally get switched into circuit by inserting a jack cable into the input, meaning you should really unplug them when not in use, if you want to save battery life. That’s not a problem with the Battery Billionaire - just flick one switch and you are done (just make sure you don’t accidentally flick it the other way during a gig!). Another plus point is it’s not that expensive, so it could be a useful gig-bag lifesaver if your mains-powered unit goes wrong during a gig.

If the thought of using batteries rather than a mains-power distributor seems a bit retro to you, bear in mind there are some pedals (particularly vintage fuzzes) that can sound better on battery power.

So, if you have more than one of these on your ’board then the Battery Billionaire may make sense - you could substitute power cables (like those from VoodooLab) that clamp onto the battery snap-connector if any pedal doesn’t have a socket for a barrel power jack.

Dano supplies its 60s-style ‘Vintage Power Source’ batteries with the unit, which it claims produce superior tone from almost every pedal. Now, while carbon-zinc batteries have a different internal resistance than modern alkaline and lithium batteries and can sound different in some pedals, all we can say is try them and see if they work for you.