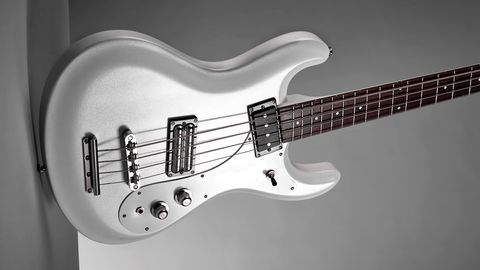 Resolutely retro in looks and passive in nature, this knowingly-named Danelectro bass looks both unnervingly unorthodox and old-fashioned at the same time.

You won’t see it played in a funk or metal band, that’s for sure, but it would definitely be at home in a country or soul outfit. Or are we just being shallow?

With its ‘reversed double cutaway offset horn shape’ (say that a few times in a row after a bottle of merlot) and those nutty pickup angles, the Danelectro 64 looks as if it’s melted slightly, like one of Dali’s clocks. Pick it up, though, and it’s solid despite being relatively lightweight; refreshingly, there’s little to no headstock dive because of that tiny headstock and the weeny tuners. (You probably think we’re obsessed with bass balance here, and you’d be right, but that’s what a couple of decades of gigging does to you... and your lower back.)

All the right engineering seems to have gone into this bass, as frankly it should be at this price. The features are traditional but well-made and assembled, from the four-bolt bolt-on neck join, the two-piece bridge and the stubbornly un-modern front jack socket. The finish of the body is lustrous in the extreme, with a touch of glitter sparkling away under the White Pearl finish, and unusually the same (or similar) finish texture has been applied to the back of the neck.

We’ve got two pickups, a single tone, a three-position selector and a coil tap available to us, and not a whiff of active electronics to be had - which makes sense, given the sounds and vibe being projected here. You’d be slightly unhinged to expect cracking treble tones out of the 64, and indeed there are very few, with the focus firmly on the low end. Solo the bridge unit, flatten or roll off the tone and pluck away to your heart’s content - it’s Motown, soul and even reggae sounds all the way.

That said, all bass and no mids makes Jack a dull boy, to paraphrase - and of course, with this bass coming from 1964 as it were, there are mids at hand. Just not high ones. What you can achieve with a bit of effort and a lot of rolling-on of tone is a Carol Kaye-style click, which adds some leading-edge definition to the notes and a touch of cut. It’s still not what you’d call a mids-heavy range, so don’t expect much clarity. Instead, enjoy the deep, warm sounds and make sure you mute a lot with either hand.

In terms of playability, you’ll need to adjust the thumb rest point a bit thanks to the pickup angle, or just do what they did back then and rest your thumb on the E string. The rear neck finish is pretty sticky, but it’s not like you were planning to sweep-pick sixteenths at 300bpm on this bass anyway. Or were you? If so, consider looking elsewhere.

The Danelectro 64 does one job extremely well indeed. We could sit here all day, doing poor Jamerson and Kaye impressions, thanks to the warm, rich sounds the 64 creates so well. If you’re asked to play anything else, bring a different bass - and be warned; this instrument isn’t cheap, especially given its ‘selective’ tone range. We still love it, though.