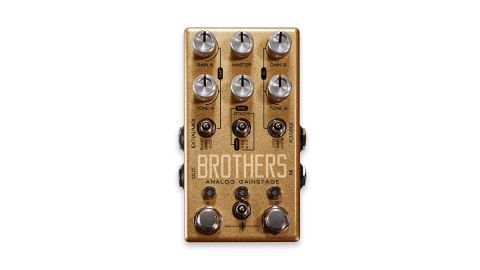 Brothers is the perfect addition to any family. Make sure it’s on your must-try list!

Chase Bliss states that its goal is to “give unprecedented digital control to original and creative analog designs” across its range of handmade-in-the-USA pedals, including this, a twin-channel dirtbox.

Its 100 per cent analogue signal path comprises two independent channels: ‘A’ based on JFET circuitry and ‘B’ which
is IC-based.

Each of these can be set to deliver Boost, Drive or Fuzz. The digital side of it determines how those two channels can be combined: there are 33 different ways, all of which can be saved (along with knob positions) as presets.

Two presets can be accessed directly from the pedal via the left and right positions of a three-way toggle switch between the two footswitches, which, when set centrally, allows the pedal to be used conventionally with knob and switch positions as you see them. You can also save and recall presets using MIDI - six via the mini pedal-sized Chase Bliss Faves MIDI controller and 122 accessed through MIDI Program Change messages.

A connected expression or Control Voltage (CV) pedal can control all parameters, pedal functions being set using the array of 16 DIP switches on the rear of the pedal, which also allow you to set either footswitch for momentary control, with the option of bypass or engage when held down.

With its large complement of knobs and switches, it may seem complicated, but for basic operation it’s really easy. You simply choose boost, drive or fuzz for each channel and then set the Gain and the thoughtfully-ranged Tone for each - a single ‘Master’ knob sets the output volume.

At this point you could just use the channels independently one at a time, but if you’d like to use both on together you can then decide which is first in the chain and set how hard that hits the second channel with the ‘Mix’ knob. Alternatively, if you set the channels to run in parallel, the Mix knob sets the balance between the two.

The different circuits of the two channels offer contrasting takes on boost, drive and fuzz that are sufficiently different to provide real tonal choice but also complement each other extremely well when it comes to setting up blends.

To generalise, Channel B has more stridency and top end presence, but that’s not the whole story. The boosts offer a range that goes from transparently upping the volume to gritty breakup with a bit of Klon-style action in there and the drives do all you’d expect from a quality overdrive, while not blatantly aping any named pedals.

Channel A’s fuzz is perhaps more distortion pedal-like but channel B has a fatter vintage vibe, while stacking both together can conjure up a ripped Velcro noisefest. It’s the combining of the channels that really opens up the sonic potential, with Mix and Tone knobs delivering delicate shading.

Parallel mode is really useful for layering sounds such as setting a boost to keep some clarity and pick attack when combined with a more saturated tone, while feeding one channel into another offers the sonic advantages of stacking two separate pedals on your ’board but with more versatility and less fuss.

For MIDI users, the full preset capability is a great asset to archive and recall created sounds - especially as so many knobs and switches are involved in that creation - but the two onboard presets offer huge practicality for all users.

Alongside the standard WYSIWYG setting these allow three configurations of the pedal that can be instantly accessed between songs onstage - for example, you may wish as standard to have channel A as a boost for a channel B drive but be able to call up drive and fuzz in parallel for another song. Expression pedal control is a doddle to set up, and using your foot to increase gain or morph between, say drive and fuzz sounds, is particularly satisfying.