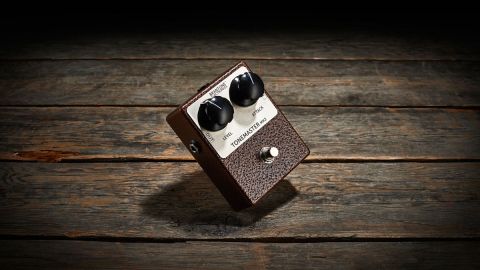 Pedals of this type left an indelible impression upon our ears having featured on innumerable landmark 60s recordings subsequently informing our tastes with regards to what a decent fuzz pedal might sound like.

As such the Tonemaster MK2 does a respectable job of recreating a host of Cream Eric Clapton and Yardbirds/early Zeppelin-era Jimmy Page tones.

The inherent tonal character of a ‘good’ germanium transistor is, ironically, a product of the technical limitations that instigated its demise and ushered in the use of silicon, yet fuzz pedals of this ilk are still in favour.

In yearning for the mojo of ‘that 60s sound’, these units have never been in more popular demand; indeed, many of the reissue circuits featuring NOS (‘new old stock’, or ‘new on/off the shelf ’) germanium transistors from unused stocks can now set you back several hundred pounds, with some originals on the vintage market around the £4k mark!

The first question, therefore, is why is this pedal only £135? A pedal hand-built in the UK with top-drawer components that sounds as good as this is incredible value. It’s a true boutique (as opposed to an artificially limited run) effects pedal with a matched set of three British 1967 vintage NOS Mullard OC84 germanium transistors individually tested for noise, leakage, gain and tone.

The result is magnificent - a characteristically warm, smooth and super-saturated Tone Bender-style pedal with an endless variety of cleaner tones available courtesy of the guitar’s volume knob.

The Tonemaster MK2 seems every bit as rugged as the Tone Benders of yore - and if they’re still going over half a century later then you might expect the Brantone Tonemaster MK2 to carry on fuzzing in true 1960s style until at least the 2060s.