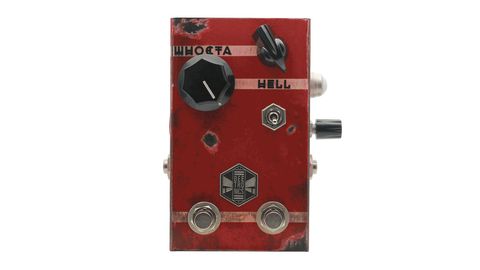 It may be an acquired taste, but sonic adventurers will love this Bee's glitchy, fuzzed-out octave sounds.

Bucking the trend for increasingly small pedals in standard Hammond enclosures, the Beetronics WhoctaHell comes in a sumptuous custom offering.

The form factor is great, and the pedal is stylish and striking - even if it is heavy enough to use as a tank-trap. Beside the standard master volume, the WhoctaHell also has dedicated controls for fuzz and octave, with the sub-octave effect kicked in via a dedicated footswitch.

The fuzz is woolly and perhaps more vintage overdrive-like in character until it is maxed out. With some higher-output pickups, it’s possible to get more saturation, but there are never Fuzz Face or Big Muff levels of fuzz on tap. Rather, the pedal seems to err on the side of a more vintage and low-gain voicing.

When people say ‘8-bit’, they generally mean square wave, and a similar crushing effect is here in the low-sub octave. Akin to the the topology of noisemakers like the Tim Escobedo TMK, the octave summing is used to both generate an octave artefact and create increasingly glitched-out and poorly tracked notes, especially when the fuzz control is dimed.

The sub octave is switchable between one or two octaves down, though for our money the single octave down is a far more usable option. While the tracking of the sub frequencies is undoubtedly part of the charm of the pedal, when it’s at the lower range of what a guitar amp is best equipped to handle in the two octaves-down mode it tends to come out as more muddy and indistinct than exciting. Set it right, however, and there’s some deliciously idiosyncratic sonic honey to be found here.