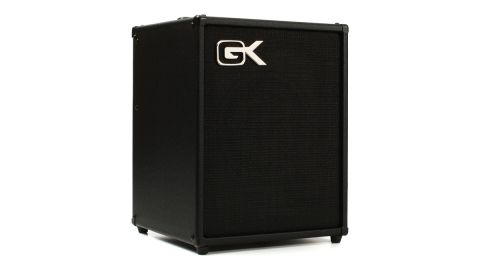 A cost-effective option for home practice, with a lot going for it.

Twenty-five watts might not sound like a lot of output for your hard-earned folding stuff, but you might be surprised how well some of the smaller bass combos out there perform, particularly with recent advances in technology.

Sure, there's no escaping basic physics but with cabinet manufacture, porting, venting and driver improvements reaching new levels of performance, this particular combo might just surprise us in terms of what it's capable of.

Constructed in the USA, the aluminium cabinet chassis ensures that the cabinet is relatively lightweight, coming in at 7.9kg and covered in a rugged black vinyl tolex covering with black metallic corners. The silver GK logo adorns the mesh grille covering to protect the speaker, and the rubber feet on the underside of the combo can be removed  if you wish, perhaps to improve bass response so that the combo sits directly on the floor.

The control panel sits in a recessed section on the top of the  unit, with the controls placed within the recess: saves them getting damaged or knocked off. The controls all turn reassuringly smoothly, and as with previous GK products, the combo as a whole appears to  be built to last: none of the visible components or features look or feel cheap or inferior.

Following the 1⁄4" jack input, controls for Gain, Treble, Middle and Bass provide a simple but effective front end, with a 3.5mm auxiliary input for connecting external audio sources and a 3.5mm headphone output.

The power on/off button illuminates in red when you turn the combo on and turns blue after a few seconds to show that the unit is operational.  The EQ section offers boost and cut at 50 Hz (bass), 500 Hz (middle) and 8 kHz (treble) respectively, while the inbuilt input pad determines the strength of the input signal in order to optimise the available headroom, bearing in mind the limited output of this particular combo.

Obviously the front end isn't going to confuse anyone with its simple layout: this combo doesn't need to be complicated, but it does need to produce an effective display. The US- produced 8" speaker should  be capable of producing some reasonable bass tones, while the additional single port should provide some extra frequency help in the lower ranges.

Using a passive Fender Jazz and an active Music Man Stingray, this combo does a sterling job of conveying what both of these basses are about tonally. Even with such a small enclosure and speaker, the GK MB108 isn't taking any prisoners.

The signal is warm and rounded with either bass, supplying plenty of articulation, detail and punch, particularly from the Stingray. The warmth of the Jazz comes across and a minor tweak of the EQ gives a little extra top end clarity, as well as some added power and definition by boosting the mids slightly.

The bass EQ supplies a powerful boost, and the unit seems more than happy to be pushed in that direction. The signal doesn't become woolly or ill-defined and with the characteristic powerful delivery of the Stingray, the combo holds up rather well in the face of a fingerstyle, pick and slap onslaught. Granted, the cabinet and speaker size have limitations, but the signals don't sound boxy or over-compressed. The single port gives the low end a noticeable boost, particularly when the unit is placed in the corner of the room.

So what do we have? Well, limitations aside, this is a more-than-capable combo and even with a rating of 25 watts at 8 Ohms, the MB108 certainly pumps out the busiest bass-lines in a very respectable manner. It's not until you really push the combo that it starts to show a few dodgy moments, which, in all honesty, may be down to the powerful circuitry of the Stingray.

The tone-shaping facilities are limited, but what GK has provided is a sensible, simple but effective EQ that offers plenty of tonal differentiation.

In a small practice context or with acoustic instruments, this amp is a very practical solution: against a drum kit and raging rock guitars, you may struggle to keep up. We're not convinced that the unit will be suitable for gigging with unless it is with acoustic instruments. The unit has no expansion options, unfortunately: you'll need to go for the next unit up, the MB110, for those. But as a standalone combo, this is a very effective unit for home practice.