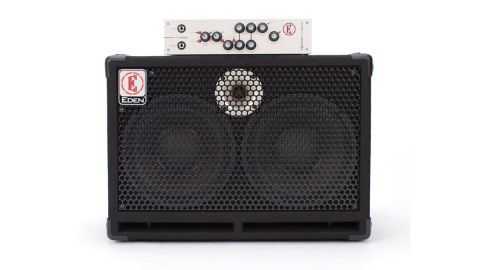 One of the leading brands in this area at the time was Eden, with its World Tour amps and D series cabinets. These products secured Eden's reputation, and it became well known for high-quality, high-fidelity, high-power - and high cost - bass amps. The flagship model was the WT800, an 800W integrated head with crystal clear tone.

Eden has been somewhat quiet since its heyday, when it boasted all-American production and the best designers in the business. Nowadays it is a subsidiary of Marshall, here in good old Blighty, with production in China. Let's see if the new gear lives up to its heritage...

Aside from the wattage, the two amps share identical features. On first inspection, the TN226 has a familiar set of controls on its front panel: input gain, master volume and an EQ with a semi-parametric mid section.

Eden has come up with a slightly quirky layout for the EQ controls, putting the bass lower down on the panel and the treble higher up. This actually makes a lot of sense when you think about it, particularly for quick tweaks on a gig. You can very easily see which knob you are adjusting without having to read some tiny-fonted text: very handy on a dimly-lit stage.

Despite its idiosyncratic knobs, the front panel has an uncluttered layout, with separate inputs for active and passive basses, a mute switch to stop the speaker thump as you switch the unit on and a boost switch, which can be operated by an optional footswitch.

Lastly, the Enhance knob adds classic scooped EQ. You can adjust the amount of scoop via the knob and toggle it on and off with the red button. Combine this with clip LEDs for each stage of the amp - Input, EQ and Master - and you have a very clean, feature-packed front panel.

The rear panel has no shortage of features too: our favourite is the illuminated Speakon connector. We are stunned no-one has done this before: it's such a simple idea, but it makes popping the cable in a doddle. No need to blindly grope around the back of a cabinet with a Maglite clasped between your teeth any more - brilliant!

All the usual suspects are there too: quarter-inch jack speaker outputs, XLR balanced out with ground lift pre/post, and pad, tuner out and footswitch connector. Eden has also added effects send and return, tuner out, mini-jack aux in for your iPod and a mini-jack headphone socket.

Again this is all very tidy and well laid out. We tested out the headphone jack, as it's an essential feature for practice. The Eden tone is there, clean as a whistle, defined and musical with no hum or buzz.

The TN210 cab looks exactly as you'd expect for an Eden, luxuriously clad in fluffy black carpet with the typically bling gold tweeter and Eden logo. It has a robust metal grille, pocket handles and plastic corner protectors.

We personally find the pocket handles a little clumsy as it's hard to get your fingers right inside to comfortably grip the cab. That said, these cabs feel very solid and well built, just as you'd expect from Eden.

We would say though, that despite their compact size, they can be a little unwieldy to cart about, through door frames for example. This is partly due to the weight and partly due to the size and balance. We should stress however that we find this a failing in almost every 2x10 we've used, so it's not Eden's fault, more the format of the cab.

So what do they sound like? Well, first we set the head entirely flat and turned off any EQ curves and compression. The sound was very clean and true, with rich mids and extended top end.

As we so often find with 2x10 cabs, we found ourself immediately reaching for the Bass knob to fatten up the lows a bit. Once we'd done that, we were rewarded with a nice controlled tone which reproduced the intrinsic sound of my bass nicely.

Both the Bass and Treble controls allow ample refinement of the sound and the semi-parametric mids enable you to sculpt it exactly to your liking. The cab is rated at 300W and can easily handle whatever the TN226 throws at it, so adding more low end or some zingy top is not a problem.

Next we engaged the Enhance EQ curve. We really liked the sound this produced: the scoop keeps some of the more nasal mids in check and allows the bass to sit much better in the mix of a band. We imagine if this amp were ours to keep we would leave Enhance permanently switched on.

Adding a touch of the TN226's compressor smoothed the sound still further. We find the inbuilt compression on modern heads can suck the life out of your sound, leaving a sterile unmusical tone: not so with the Eden, this was quite subtle even beyond 12 o'clock, gently limiting the peaks. Only with the dial maxed did it squish really hard, and even then in a pleasing, usable way.

If you've ever had the pleasure of playing through an Eden World Tour rig, then you'll understand what we mean when we refer to the 'Eden sound'; it's accurate, full range and packs a meaty punch.

This Terra Nova rig has this same classic sound in a portable, lightweight package. Eden's website points out that the TN226 and TN210 are designed to be paired with one another to create a portable rig for rehearsals, small bars and clubs. We would go along with that for the most part, but perhaps not if you're in a very loud rock band. If you are, we suspect you'd be looking at a more imposing rig in the first place!

Upright, acoustic and electric bassists will love the detailed, hi-fi tone that the Eden offers. We used it for a couple of smaller restaurant gigs and it had more than enough oomph. When using the TN226 on a few larger outdoor gigs, we added a second cab and had to ramp up the volume, so we would advise you to go for the more powerful TN501 head if you'll mainly be doing larger gigs.

Overall, the Terra Nova system is very competent. It includes all the modern features you'd expect, as well as innovative new features like the clip LEDs and illuminated Speakon connectors. Fans of the original Eden WT line will love the Terra Nova. As to whether it's enough to recapture Eden's crown, only time will tell.