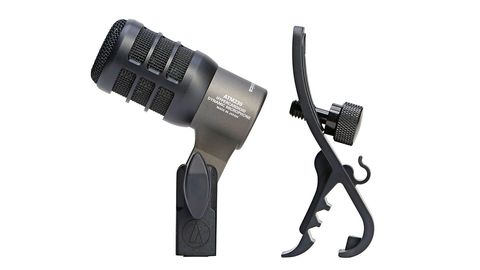 Audio-Technica has picked up the task-specific baton and delivered a quality design that makes tom miking incredibly simple.

Although the ATM230 could potentially be used for miking any loud instrument, it’s primarily designed for close-miking drum kit toms and possibly snares.

The mic’s compact and stubby design (just over 8cm long) makes it suitably discreet for live use. It’s pretty weighty given the size, and the all-metal construction includes an integrated clip arm and reinforced metal grille, which should cope well with any bumps and knocks.

On the inside AT has used a rare-earth magnet for improved output and transient response. Like most dynamics, impedance is reasonably low (600 ohms), and at 1.9mV/Pa, the sensitivity isn’t amazing but reasonable for a mic of this type. The ATM230 package includes a standard soft pouch and also the space-saving AT8665 drum mount, so you can clip the mic to the drum rim.

The ATM230 has a tailored and slightly crazy-looking frequency response, with a lift in the midrange (peaking at around 3.5kHz), a lift in the high frequencies between 6kHz and 8kHz, and a pretty fast tail off from 10kHz upwards. Amongst this there’s also a pretty obvious notch just above 4kHz, and a very subtle lift in the low frequencies.

However, figures are quoted at a distance of 12 inches, so once positioned just above the drum rim we’d expect things to change a bit, particularly for the low frequencies.

In terms of off-axis response the polar pattern narrows in the high frequencies pretty quickly as you move away from right on-axis, and rear rejection is good (-10dB or better), so the ATM230 should help curtail cymbal bleed.

Closer to the skin

If you usually mic your toms with a general purpose dynamic (Sennheiser’s MD421, for example) or even a bespoke instrument mics such as the ElectroVoice N/D408, then function-specific designs like this may seem odd.

However we have to say, straight out of the box this mic is just right. The toms sound punchy with a nice fat attack, and as suspected, the added proximity delivers plenty of round bottom end... but without excess boominess.

The specs don’t indicate a maximum SPL, but a quick zoom in on the recorded waveform reveals no obvious overloading. As expected, high frequencies are considerably reduced off-axis, and coupled with the on-axis high-frequency tail off, for the most part, you’re getting what you want, which is just the tom attack and body.

On the snare, the high-frequency tail-off is more obvious. Even so, the snare body sounds pretty good, and with a few dB high-shelf boost, the ATM230 could easily be used as a top snare mic if required.

At its £140 list price, the ATM230 offers fair value, but if you’re after a tom miking kit, the three-pack at £299 is no brainer. Overall, an excellently made mic that makes capturing toms a doddle.