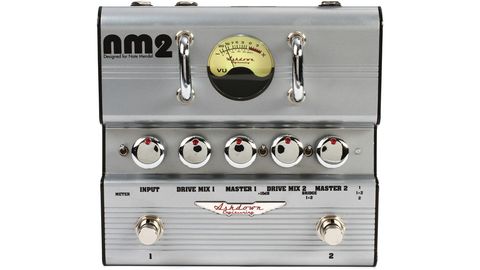 As Nate Mendel told us recently, distortion is the only effect he uses on stage with the Foo Fighters, applying a range of drive to his sound from a touch of grit to the full, blown-out wall of sound.

As his distortion needs vary, it makes sense that he’s developed a dual-drive unit with Ashdown, which also supplies him with a signature amp.

£119 is a fairly hefty chunk of cash to part with in an era where a cheap plastic overdrive will cost you tuppence, but read on and you’ll see where the money’s going. For starters, the NM2 is a solid chunk of metal: when your guitarist falls over it, he’ll be the one who comes off worst.

A single input, with volume controlled by the Input control and visible on the meter, sends your signal to Distortion 1 (green LED) or 2 (red LED) or indeed a combination of both (yellow LED). You can send two differently distorted signals to separate amps via two outputs if you wish, or send a single signal to one amp, distorted once or in combination as you choose. Compare input and output volumes on the meter using a dedicated switch.

The actual distortions vary in strength. 1 is subtler, adding a layer of crunch to your sound; 2 is bigger and nastier, with a +10dB boost switch to make it even more evil if you like. Go for 1, or a combination of 1 and 2 with a greater emphasis on 1, if it’s brightness you’re after; for a doomier sound, stick with 2.

Both distortions in combination give you a massive distortion if you want it, although there’s a smoothness to the sound too.

There’s plenty of low end, crucially, and when the unit is bypassed, your tone remains completely dry. Chords sound immense, making this unit feel and sound capable of a stadium gig, even though your next gig is more likely to be the local Slug & Lettuce if your band is anything like ours. The verdict? A full, McCartney-style thumbs up.