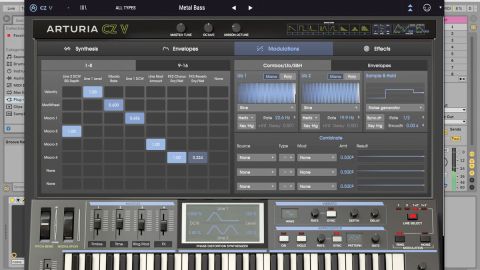 Still the best all-round vintage synth bundle on the market. Synthi V and CZ V add huge value to what was already a powerful collection.

First, some background: In case you haven’t been paying attention for the last 11 years, V Collection is essentially a bundle of Arturia’s vintage synth and keyboard emulations. It doesn’t include the recently released Pigments plugin, but it does include just about every other synth instrument the company make.

Since its inception, Arturia’s main focus over all else has been emulating vintage analogue synths. Since then, the company has branched out into digital synths, more modern classics and non-electronic keyboards, including pianos and organs.

Version 6 of the V Collection bundle, released early last year, added four new instruments (emulations of the Yamaha DX7, Buchla Music Easel, Fairlight CMI and Hohner Clavinet). This time around there are three further additions in the form of Casio CZ, Mellotron and EMS Synthi instruments. Elsewhere, B-3 V, the Hammond organ instrument, has had its sound engine overhauled, while Analog Lab has been updated to version 4, plus there are around 800 new presets for legacy instruments in the form of Synthopedia. There simply isn’t enough space to go into detail about everything here, so we’ll focus on the three biggest additions and see what they bring to the party.

Synthi V, modelled on the 1972 EMS Synthi AKS, sits nicely alongside Buchla Easel V as a more out-there sub-section of V Collection synth options. The Synthi is a surprisingly underrepresented synth in the software world considering its contribution to electronic music. There are a few ROMplers around, and XILS Lab’s XILS 3 is based on the similar VCS3, but Synthi V is the most serious virtual Synthi instrument to date.

What is a Mellotron?

First released in 1963, the Mellotron remains a unique keyboard instrument. Vaguely similar to a modern sampler but using a strip of magnetic tape for each key instead of digital storage, the Mellotron allowed rough approximations of things, like string sounds, brass and choirs, to be played back polyphonically, years before the first samplers hit the market.

It’s best known as that woozy, warbling flute intro to the Beatles’ Strawberry Fields, or the keyboard backing ’60s hits like David Bowie’s Space Oddity and Procol Harum’s A Whiter Shade of Pale. Since then it’s found its niche in experimental rock and psychedelic music; and when bands want an endearing lo-fi keyboard sound.

Pleasingly, it lives up to expectations. If we had to pick an artist most closely associated with the Synthi, Brian Eno would probably top the shortlist. His approach to music should give a hint of the kind of sounds to expect from Synthi V: experimental, innovative and leftfield. That’s not to say it won’t do simple basslines and leads, but it excels when you start getting freaky.

Arturia has also chosen to give it the option of polyphony (the original was monophonic), which works surprisingly well. The modulation routing certainly takes some getting used to compared to most approaches, but that’s part of the joy of this unique synth, along with exploring the potential of the joystick modulation (which is automatable, unlike the original) and step sequencer (a substantially more powerful intuitive affair than you’d find on the original hardware). Highly recommended to anyone looking to explore weird and wonderful sounds.

CZ V is an all-new phase distortion synth, modelled on the Casio CZ range of the early ’80s (the CZ-101 and CZ-1000 are the specific reference points here, but the synthesis architecture and sound were broadly similar across all the models). Generally seen as a cheaper alternative to Yamaha’s DX range of FM synths, the CZs could do similarly crystalline pads and dirty bass sounds, but could also sound closer to traditional subtractive analogue synthesis. As a bonus, they were much easier to program too.

Yamaha’s FM synthesis method rocketed onto the mass market with the release of the DX7 in 1983 and establishing itself as the signature sound of mid-’80s pop music. Casio’s answer to digital synthesis arrived in 1984 with the CZ-101, an affordable synth based around phase distortion. Although they felt cheaper than the DX synths, the CZ models were much easier to edit. The key to success is getting to grips with the digitally controlled waveform (DCW) section, which adjusts the amount of modulation on the oscillator and controls harmonic content, much like a filter.

Plugin Boutique’s VirtualCZ plugin is the main alternative here, but CZ V has its own selling points to set it apart, notably macro control, dual LFOs, a modulation matrix and some of Arturia’s consistently reliable effects. Like Synthi V, CZ V adds another distinct flavour of sound to the V Collection. You already had FM synthesis in the form of DX7 V, plus more classic analogue sounds than you could care to mention elsewhere, but CZ V fits nicely somewhere in between. It’s exceptional for bass sounds.

There are plenty of existing Mellotron-inspired instruments on the market already - GForce’s M-Tron, UVI’s IK Multimedia’s SampleTron and UVI’s Mello, to name just a few - but they tend to be strictly sample-based. Generally speaking, Arturia prefer real-time synthesis and modelled emulations of hardware, turning only to samples when strictly necessary. However, given that the original Mellotron was based on tape recordings, the hybrid approach makes total sense here, working from samples, but then modelling the playback, tape wobbliness and associated electronics around them. The ability to load your own samples then use them as the basis for new instruments is particularly cool, thanks to the Mellotron’s distinctive saturation, wow and flutter.

There’s very little to complain about with the updates in V Collection 7, but users of Native Instruments controllers will be disappointed that the new synths aren’t yet compatible with the NKS protocol. We’re led to believe this will be added in a future update. That aside, the update is typically strong stuff from a developer we’ve grown to expect a lot from. V Collection remains the definitive bundle of vintage synth emulations. There may be some plugins that do certain things better than Arturia’s version, but as an all-round package it’s very hard to beat.

So does it still represent value for money? If you’re new to the bundle, we certainly think so. However, the upgrade price for existing V Collection owners probably isn’t worth it: that’s a lot to pay for just three new synths, if you’ve already got version 6.