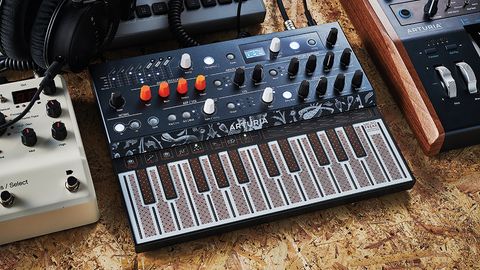 Packing tons of power and innovative features into an affordable box, Arturia’s new offering is weird, wonderful and downright fun.

Arturia’s new “algorithmic synthesizer” is a noteworthy departure for the French company best known for its analogue hardware synths and software emulations of classic instruments.

Out of the box, MicroFreak’s unique stylings immediately grab your attention. It’s a bold look - but we like adventurous design choices.

In terms of build quality, the synth’s plastic chassis and keybed feel a tad flimsy. Some design compromises are understandable for a synth of this price, after all, and MicroFreak’s diminutive size and weight are definite advantages where portability is concerned.

Up top sits an OLED display, which shows visual feedback for the current parameter - preset names, waveshape changes when tweaking oscillator settings, filter sweeps, envelope/LFO curves, etc. This real-time visualisation is both useful and aesthetically pleasing, and greatly enhances the overall programming experience as you dial in settings.

Round the back, MicroFreak’s rear panel packs in a ton of connectivity options for such a small synth. Usefully, it can be bus-powered via USB, or connected to the mains with the bundled PSU; there’s a single mono 1/4-inch output for audio, plus a headphone output; 3.5mm CV/Gate/Pressure outputs; and 3.5mm MIDI In and Out.

Here's how it works

MicroFreak is a four-voice paraphonic synth – when the Paraphonic button is engaged, you can play up to four voices at once, but all share the same filter, envelope and under-the-hood VCA settings.

Sound generation is handled by the single Digital Oscillator, several variations of which implement Mutable Instruments’ open-source designs. 12 modes are available: choose one with the Type knob, and the OLED screen is populated by three parameters, unique for each mode, adjusted with Wave, Timbre and Shape knobs and seen onscreen with little ‘test tube’ meters. Funky.

For more complex wave scanning, there’s a Wavetable oscillator; the Harmonic oscillator, complete with Chorus, is useful for dialling in additive, bell-like timbres; the Karplus-Strong mode is a physical-modelling oscillator that facilitates the creation of bow- and string-like sounds; and the Modal Resonator replicates the tuned ringing of real instruments and drums.

Unsurprisingly for a digital synth, there’s a two-sine-operator FM (frequency modulation) oscillator, which features Ratio, FM amount and Feedback controls. The Waveshaper mode, meanwhile, uses a combo of waveshaping and wavefolding, and can spit out biting basses and resonant harmonic tones with ease.

Aside from these well-known synthesis types, MicroFreak also features several experimentally-minded oscillator modes. The Speak-and-Spell-style Speech mode outputs synthetic vowels and consonants that can be scanned through, while the Granular Formant oscillator breaks a waveform into ‘particles’ and allows you to recombine formants in various ways.

For us, though, the USP is the Chords oscillator, which outputs a four-voice chord. The Wave knob is used to choose one of 11 chords, the Timbre knob switches the current inversion, and Shape scans through a host of waveform shapes.

As you can tell, MicroFreak often feels like multiple synths in one. If you’re stuck for ideas when dialling in a patch, quickly flipping over to a different oscillator mode can instantly inspire something new out of thin air.

On the downside, being a digital synth, a lot of these oscillator types can sound a little… well, digital. However, this isn’t necessarily a bad thing – when you need a brash, harmonically complex sound that can slice through a mix, MicroFreak can do it in so many different ways.

While the oscillator is unashamedly digital, the filter it feeds into is fully analogue, albeit digitally controlled. Inspired by the classic Oberheim SEM design, this state-variable, two-pole tone-shaper can be switched between low-, high- and band-pass modes with the Type button, and is flanked by Cutoff and Resonance knobs.

In use, it sounds smooth across a wide range of settings, and high Resonance settings result in meaty boosts up to a satisfying ‘howl’. The 12dB/oct design is obviously a little smoother and less intrusive than 24dB/oct designs, and we’d have loved another mode for deeper filtering tasks, but that may be too much to ask for at this price point.

MicroFreak’s Buchla Easel-style 25-key capacitive keyboard is an interesting addition in both looks and playability, encouraging a different kind of performance. Unlike regular keys, these PCB flat strips are covered in copper dots that respond to the amount of surface your fingers cover, resulting in the output of gate, pitch and pressure (or velocity) data that can be assigned to any parameter via the Matrix. Polyphonic aftertouch is possible, and various responsiveness options can also be adjusted in the Utility menu, too. For note bends, there’s a bipolar Touch Strip that lets you ‘punch in’ and scan specific jumps or slides below and above the current pitch. For more performance possibilities, the synth features an Arpeggiator: engage it with the Arp button, set Rate and Division, set an Octave range between one and four, then hold down a chord to cycle through those notes. There are also two four-voice-paraphonic Sequencers onboard, which run at a global length of between four and 64 steps. Each sequence can store up to four MicroFreak parameters for hands-free parameter automation, and be used as destinations for mod duties.

MicroFreak’s oscillator and filter parameters are obvious candidates for modulation, and the synth’s 5x7 “switchboard” Matrix makes setting this a breeze. The seven horizontal rows represent mod destinations – the first four are hardwired to Pitch, Wave, Timbre and Cutoff, while the Assign 1, 2 and 3 slots can be freely assigned by clicking a top button and twisting the desired parameter on the synth. The five vertical columns equate to the five available mod sources: Cycling Envelope, Envelope, LFO, keyboard Pressure and Key/Arp.

To hook up modulation, spin the Matrix encoder to select a specific crossing point between source and destination, indent it to activate, then turn the knob left or right to apply negative or positive modulation. It’s a fast, intuitive workflow that encourages you to try out multiple mod assignments on the fly.

Speaking of modulation sources, MicroFreak offers three main modulators: two envelopes and an LFO. The regular Envelope (Attack, Decay/Release and Sustain) is hardwired to the filter, with cutoff mod depth applied with the bipolar Filter Amt knob. This envelope can also govern amplitude when the Amp Mod toggle button is engaged.

The Cycling Envelope can operate in either a regular one-shot Envelope mode; a Run mode, which acts as a free-running LFO of sorts; or be set to Loop, analogous to a retriggering LFO. Its influence can be tempered by pulling back the Amount knob, while tweaking Rise, Fall and Hold/Sustain amounts lets you create and merge complex mod signals. You can even bend the Rise and Fall curves between linear, logarithmic and exponential shapes by Shift-turning the knobs. In practical terms, this Cycling Envelope can create everything from slow, repeating rises/falls and gurgles right up to audio-rate weirdness, while OLED visual feedback shows what’s going on.

MicroFreak’s single low-frequency oscillator is fairly basic, but gets the job done. Select one of six shapes with the Shape button, while speed is set with the Rate encoder (click this in to switch between unclocked and tempo-synced modes). It can also be set to retrigger, envelope-style.

Eight icons sit above the keyboard. The first allows you to Hold notes for extended playing. The next four (Up, Order, Random and Pattern) are used to operate either the Arpeggiator or Sequencer depending on which is selected – random options for the former, and note entry and transport controls for the latter. The next two icons, abstractly named Spice and Dice, are used together in conjunction with Touch Strip presses to effectively shorten, lengthen and pause Arpeggiator or Sequencer notes for on-the-fly performance changes.

With so many synthesis features packed into such a small box, it’s hard not to fall in love with Arturia’s latest hardware offering. The multiple oscillator modes cover a near-endless range of timbres; the filter is smooth and versatile; the Matrix invites exploratory modulation; and the performance and sequencing tools are the icing on the creative cake.

However, the real magic lies in the combo of all these together, making this odd little beast far more than the sum of its parts. MicroFreak should be top of your ‘must try’ list.