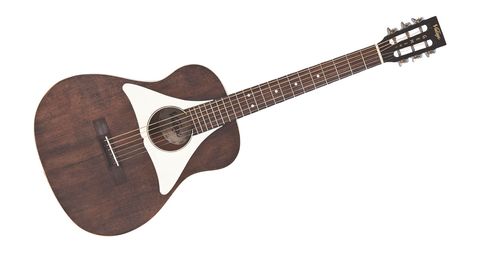 A baritone that can be used as a standard-tuned electro just by changing the strings. Sounds bonkers, but isn't.

While Vintage certainly contributes to the over-population of regular-style acoustics within its capacious range, in recent years we've seen some interesting input by the likes of Gordon Giltrap and collector Paul Brett.

Brett's signature range is inspired by the past of the steel-string. On paper, the new Gemini is the most radical yet: a 628mm (24.75-inch) short-scale baritone that's also a standard-tuned rootsy electro.

With all-solid wood construction, Fishman pickup system and a gigbag, the Gemini certainly ticks the value for money box. But it's also decidedly left-field, not only in concept but appearance, too.

"The idea came from a 1930s Kalamazoo KG 11," Paul informs us. "I had one strung with baritone strings and although the wood and bracing didn't warrant prolonged usage in that genre, I got a really great and tight sound from the low end. I thought it would be of benefit if a dual usage could be achieved with a simple change of strings."

In the flesh, it's a tidily made, heavily braced small body guitar, similar to Taylor's shorter-scaled GS Mini with a 440mm body length, a max width of 371m across the lower bouts and max side depth of 105mm.

Back and sides are mahogany, and the top is spruce, although both are given a unifying brown-stain 'vintage' finish. Then there is the unusually shaped high-contrast pickguard - this little 'un stands out a mile.

If the pickguard has Marmite appeal, so too does the mahogany neck, topped with a clean, nicely small-fretted rosewood 'board. Its profile has a very angular V shape with serious depth - 24.5mm at 1st fret, 26.8mm at the 10th. The slotted head is in keeping with Paul's sense of style. Likewise, the chrome-plated Waverly-style tuners.

A nod to the present is the Fishman Acoustic Matrix under-saddle pickup with Natural I active endpin-mounted preamp and soundhole volume and tone controls.

To clarify, to move from baritone to standard tuning you have to restring the guitar. We requested our pre-production prototype with standard 0.012 to 0.053 strings in standard pitch, and its acoustic fingerpicked sound is quite parlour-like, with a kick in the mids and sufficient low end, though far from huge - unlike the neck, which is.

To be fair it actually proves more comfortable than we initially thought, but it kind of suits the quite primitive, rootsy, bluesy character that is certainly very bottleneck friendly. Tuning down to open G, with pick and fingers, the Gemini takes off with more depth, more kick.

Our contributor Jim Kimberley tunes the Gemini down C to C, and while there's that slight 'the record's too slow' sound to the slack strings, it's decidedly dark yet more contemporary at the same time.

Restringing with baritone 0.016 to 0.070 strings isn't straightforward; we have to modify the low string bridge pin and even then we can't get it to fit properly and open out the nut grooves. It will ship with baritone strings, so doing the reverse re-string shouldn't be a problem, we're told.

By design, it doesn't have the sparkling piano-like voice that a Taylor baritone creates, for example. This shorter scaled, lower tension baritone is a more muted affair; played fingerstyle, the bass strings struggle to make themselves heard over the trebles.

While there's again a sort of slowed record tonality, once tuning has stabilised we begin to enjoy the very bass guitar-like low end and full-bodied treble, even if the low tension does take some adjustment. Amp'd up, the Fishman system translates all this in a clean, direct and balanced fashion. There's a lot to consider here.

The Gemini reminds us of finding a dusty ol' guitar that's seen better days but sounds really authentic for older bluesy styles. Yes, the neck is huge but so is the potential. If you're bored by the same old acoustics, the Gemini could well be your antidote.