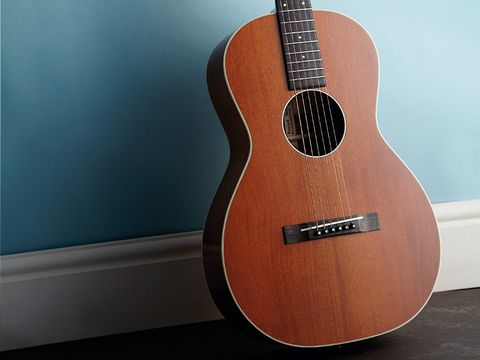 Another world-class guitar from PJE

After occasional promptings in the past, Patrick Eggle introduced his first parlour-bodied guitar a few years ago.

The standard model is a spruce/rosewood 12-fretter with a slot headstock, but what we have here is a rather special incarnation, which Patrick lists it as one of his Unique Guitars, since it is presently a one-off.

"The Cuban has an impressively grown-up, open timbre: warm, smooth and, for its body size, richly textured and dynamic"

A significant contributor to its specialness is that the body is formed from pieces of old, very high quality Cuban mahogany that actually once saw service as a bank cashier's desk. Patrick has had this beautiful timber in stock for a few years, and has enough for another three or four instruments.

Designed, as he puts it, as an 'old school' interpretation, there are a number of period constructional aspects. First, the guitar, rather than employing Patrick's usual Titebond white resin adhesive, is put together with hide glue - the type that was used pretty much universally on vintage acoustics and other old stringed instruments.

Applied hot and brushed on, it's not necessarily better than modern adhesives but Patrick cites its good capillary and soaking-in properties as two advantages. He offers it as an option on all his guitars for £100 extra.

Second, the Cuban's beautifully buffed finish - gloss on the body, semi-gloss on the neck - is nitrocellulose, which Eggle is reverting to on all his guitars, not only because he's rediscovered a high-quality supplier, but also because his previous UV-cured lacquer is no longer produced.

Other retro touches include a bar ebony bridge with long saddle and a Brazilian rosewood headplate. The nut and saddle are both unbleached bone, which Eggle prefers because bleaching, he says, tends to soften the material.

One hardware aspect that seemingly bucks the approach is fitting Grover Rotomatic tuners rather than open-geared Waverlys. Patrick's rationale is that since he opted to use his regular peghead design, not the slot variety as on the standard parlour, he felt the die-cast jobs were a better aesthetic match. Feel free to agree or otherwise.

Cosmetics on the 343mm (13.5-inch) wide, 102mm-deep guitar are tastefully discreet. The body and soundhole are bound in ivoroid with thin three-ply dark/light-wood purfling; the markers along the unbound ebony fingerboard are simple pearl dots. The heel cap and endblock inlay both look like headplate-matching Brazilian.

Attached by Eggle's usual Collings-style bolting system, the 632mm-scale one-piece South American mahogany neck is unsurprisingly configured for fingerstyle, with an airy 46.5mm span at the nut and a mainstream bridge string spacing of 55mm.

The width might suggest a bit of a handful (and if that worries you, he will happily fashion a slimmer affair at no extra cost) but in fact the neck's an easy, accessible player, even for smaller hands, thanks to a shallow 'C' profile that graduates gently from just 20mm at the first position to under 22mm prior to the heel turn.

The relatively weighty Grovers prompt a hint of neck heaviness despite the 12-fret configuration, but not annoyingly so. Needless to say, the fretting is immaculately fitted and polished.

Conventional wisdom says that a parlour's default sound is boxy and brash. Not this all-mahogany Cuban's. It has an impressively grown-up, open timbre: warm, smooth and, for its body size, richly textured and dynamic, counterpointed by a sweetly sustaining bite in the highs to endow the required presence. Lovely.

One of Patrick's motivations for the Cuban was to demonstrate what can be done with different wood sets. The result is a little beauty that, though it might not be first choice as a blueser's parlour, is hugely adept at handling an otherwise varied repertoire that many parlours would struggle with.

Chances are his remaining Cuban mahogany won't be around for long, so if you've the wherewithal, get your order in. Alternatively wait for a production all-mahogany version, because that's what we think Patrick should do next. The proof's already in the pudding.