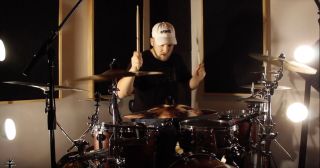 Schiermann, the instrumental project from guitar virtuoso Chris Schiermann released their debut in 2017, which was the culmination of over 10 years of writing. Taking in everything from classic shred, djent, prog and fusion throughout. As well as some blistering guitar moments, the self-titled album also features more than its fair share of drum licks too.

Here, former Animals As Leaders drummer, Navene Koperweis takes a break from his regular gig in Entheos to play through the track Northern Lights. Raised on a healthy diet of Tim Alexander, Terry Bozio and Morgan Agren, Navene plays through the track with some tasty yet accessible chops.

Navene tells us, "I thought the vibe and groove for this track would make for an entertaining drum playthrough! If I can play on someone's music and bring my voice to it then I've done my job. That's definitely my favourite thing to do when playing on any song."