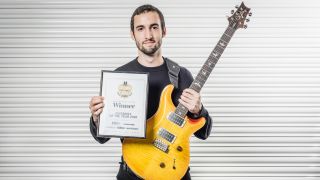 During last year’s Guitarist of the Year competition, Canadian guitarist Gabriel Cyr’s video was singled out by guest judges Joe Satriani, Paul Gilbert and Mark Tremonti. Alongside two others finalists, Cyr travelled to London to perform live at the UK Guitar Show.

Ultimately Cyr’s confident, virtuosic performance led him to the win. In addition to earning the title, he received a stunning PRS USA Custom 24 in McCarty Sunburst and a year’s supply of Ernie Ball strings.

Enter Guitarist of the Year 2019

Enter Young Guitarist of the Year 2019

Enter Acoustic Guitarist of the Year 2019

Enter Bassist of the Year 2019

In the months since the win, Cyr has seen an upswing in views on his own YouTube channel, been interviewed for radio and newspapers and has started performing clinics in Quebec. It’s safe to say that earning the Guitarist of the Year title has really helped set the trajectory of his career.

We caught up with him to share his experiences and memories of being involved in the competition and to get some tips for any guitarists thinking about entering Guitarist of the Year 2019.

What opportunities has winning the competition and being awarded the Guitarist of the Year title afforded you?
“The main benefit has been the visibility the event gave me. I had a few interviews with the biggest radio and TV channels in Quebec and I also had a full page in the newspaper. It helped me and my band Universe Effects to promote our last album Desolation which was released in October 2018. Also, my YouTube channel now has 37,000 subscribers. Before Guitarist of the Year I only had 300. I also started to do some clinics in Quebec.”

The video of your performance at the live final has been viewed 353,000 times. Has this had a positive impact on the growth of your guitar playing career?
“It certainly helped the visibility of my YouTube channel!”

What were your personal highlights of taking part in the Guitarist of the Year final at the UK Guitar Show?
“Meeting and sharing with the other finalists who were amazing musicians but also great human beings.”

How would you describe the atmosphere at the event?
“It was very relaxed and friendly. Everybody just wanted to enjoy the event and it had a very positive vibe.”

How did it feel when you heard your name announced as the winner live on-stage?
“I was very happy but also very surprised! The other two finalists were amazing. It must have been a hard task choosing a winner.”

You won a PRS guitar and Ernie Ball strings as part of your prize. Have you been putting them to good use?
“Of course! The PRS is now my main guitar. It's amazing how the instrument feels and responds in a very wide stylistic area. It is the first time that I have enjoyed playing jazz on a solid body guitar. Normally, it sounds thin and it does not feel right but with this guitar I can play a top 40 gig, some progressive metal, some fusion and it will still sound great if I play a jazz standard with a clean sound. The Ernie Ball strings are also an amazing prize. They sound fantastic and feel right even when they’ve just been installed. For an artist like me who is starting his career, this kind of support makes a huge difference.”

Why do you think the star judges singled out your entry video to go through to the live final?
“I think it was a well-produced video with two original guitar solos showing what I do. I tried to keep it simple and concise.”

What tips can you offer this year’s entrants in terms of choosing the right piece to perform for their entry?
“Focus on your strengths, choose a piece that shows what you can do best. If you have a great feel and can touch people with a ballad, do that! If you can make your guitar cry over a blues chord progression, do that! For me, it was some kind of fast progressive rock/metal soloing because it is something I am very comfortable with.”

How important is it to strike the right balance between precision, tricks and feel?
“Music is a very subjective field. Try to stay authentic while showing what you can do best without overdoing anything. It is not absolutely about technique and tricks, you must find something that distinguishes you from others. For me, the technical aspect was one of my strengths, but it doesn’t have to be the same thing for you.”

What tips do you have for shooting a great video from a visual and audio perspective?
“First, use a good camera. It can be a DSLR or a camcorder, but you should aim at least for full HD quality. You probably know someone who can lend it to you if you don’t have one. For the audio, you can use any audio interface with some mics and an amp or a modeller or profiler device. Be picky with your tone! This is the first thing that the judges will hear; way before your technical skills or your rhythmic ideas.”

Do you have advice for guitarists who are too nervous or feel they don’t have the skills to enter?
"I wasn’t sure myself if my entry was good enough. I am a perfectionist when it comes to music. I tried anyway and it worked out well in the end! Don’t say no to yourself, you have nothing to lose.”

Enter Guitarist of the Year 2019 here!

8 tips for Guitarist of the Year success