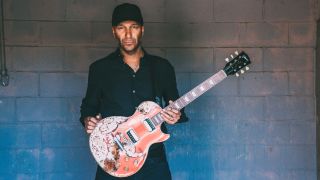 WORLD GUITAR DAY 2018: To someone like Tom Morello, the guitar isn’t just his instrument – it’s his weapon. The Harlem-born musician has been on the frontline of the political battlefield, striving for a more just world since forming Rage Against The Machine in 1991, and witnessed first-hand how six strings on a block of wood can open minds, transcend borders and ultimately bring about change. On their explosive debut, the group pledged they would “settle for nothing now and we’ll settle for nothing later”. Thankfully it was a promise the guitarist kept.

27 years on, on World Guitar Day 2018, Morello is still loading ideas into his guitar like bullets in a gun. And he’s vowing to continue, until inequality or injustice are things of the past, when he’ll most probably retire from the activism he’s known for to write what he jokes as “nothing but love songs”. That idyllic utopia still seems like a distant future, so for the time being there’s plenty of work to be done and the war rages on. Here he tells MusicRadar how his chosen instrument has loyally served as the ultimate vehicle for leaving his mark on the world…

1. The guitar is an instrument that evolves with you

“I suppose the electric guitar has meant different things to me through the years. As a very young man, when I caught sight of an electric guitar, it was an explosive experience. It was like someone having kryptonite or a rocket launcher – something very dangerous that I was drawn to and afraid of at the same time! There would be this mysterious power surrounding it all. These days when I see a guitar, I have some that are very old friends and comrades who have spent time at the barricades, and then a few strangers who are more like outliers. But they are all collaborators or co-conspirators.”

2. Pianos struggle to capture the same spirit of rebellion

“I’m not quite sure why it is, but I feel it may all trace back to the Robert Johnson crossroads story. While the piano and the flute are more like the instruments of heaven, the guitar - and the electric guitar especially - was the instrument of down below. There’s this feeling you get the first time you strap on an electric guitar and step on a distortion pedal. I was wondering why my new jangly guitar didn’t sound like Led Zeppelin and trying to figure out what was wrong with me, and then this pedal transformed everything into an absolute surge of power.

"It’s an electric power, sexual power, psychic power… all kinds of power going through my body in that room. There’s nothing like that experience. And there’s volume as well – there’s only so much sonic thrust you can have with a French horn… which was my first instrument, so I know first-hand!”

3. Sometimes it’s the instrument that chooses you

“I didn’t choose to be a guitar player. The guitar chose me. It was very much a calling, like the heavens opened for me. I started playing at the age of 17 and I’d say by the age of 19, it really felt like I had no choice in the matter. Whether it was a blessing or a curse, I was being told this would be my vocation whether I liked it or not. I then had to find a way to weave my convictions into my vocation. Groups like The Clash and Public Enemy certainly led the way in that regard. The goal was to be unapologetic, unwavering and uncompromising in both the music and the message.”

4. There’s no shortage of inspiration out there

“I wrote my first political song, Salvador Death Squad Blues, straight after listening to The Clash’s London Calling. I think I might actually remember how to play it, ha ha! It was an eight-bar blues in G with a bit of a riff in the chorus. I remember that moment. Until then, I had been exclusively a fan of heavy metal. I might have had a Sex Pistols record, but The Clash made me realise that I didn’t need to exclude my ideas about the world in the music I was writing.

"Before that, it was like two completely separate endeavours. One side was being in a rock band singing about girls and vague notions of personal rebellion, and the other was the realm of political activism where you were trying to change the world. I identified as an activist very early on and The Clash made me realise that those two worlds could be one and the same.”

“I’m continually striving to do that, even on my latest record The Atlas Underground. Pretty much every record I’ve made, all 15 or 16 of them, has used the guitar as a divining rod of change. That can happen in two ways – you can write a song on the electric guitar with lyrical content that has political ramifications. But the guitar itself, independent of any lyrics, can be politically revolutionary. If you think, for example, about Hendrix’s version of Star Spangled Banner at Woodstock… or even going back outside of the guitar, John Coltrane’s saxophone solos or the disjointed collages and rhythms of Public Enemy.

"My point is that the music itself can be the rebellion. If you are able to challenge the conventions of your genre simply with music, it makes others feel like they can challenge conventions in other realms of life. I certainly felt that way when I heard Public Enemy – their music didn’t sound right. It didn’t fit the way music was supposed to, and yet I knew it was awesome. So it made me think perhaps there are ways we can rearrange our lives in society that may not fit the accepted boundaries and still be awesome!”

6. There is still injustice to fight in this world

“I think there are two constants between now and when I formed Rage Against The Machine in 1991. There was injustice back then and there is still injustice now. Back then, there were people willing to fight that injustice and the same is true now. Until we reach that harmonious future when I’ll be allowed to write nothing but love songs, the battle continues, ha ha! It’s a matter of which side of history are you on. Can you stand in your home, school or place of work and do your part in that struggle, for a more just and humane planet?”

7. The guitar has given me a sense of control in a world of chaos

“Reflecting back on my time doing all that obsessive practising - eight hours a day while pursuing an honors degree at an Ivy League University - it was control in a world that felt politically, romantically and personally out of control. I knew if I applied myself and my will to these six strings and this piece of wood, it was only on me. No one had anything to do with the outcome… and I loved that. I started playing late, so I had a lot of catching up to do, but I knew there was no limit to what I could achieve if I applied myself.”

8. The guitar is so much more than a rock instrument

“When I was at the height of my eight-hour-a-day practice sessions, I would jam a lot with jazz records from Wes Montgomery to Coltrane to Charlie Parker to some of the fusion guys like Allan Holdsworth and Al Di Meola, trying to get inside that style of playing. Which was very different to all the Quiet Riot and Foghat other people might have been learning from. I also dragged with me into the ‘90s the very ‘80s sentiment of the gunslinger – where you want to be the best guitar player. It’s a competition! Not even just with speed, but also panache and innovation in the post-Nirvana era, when there were hardly any guitar solos on hit records. I always kept that arsenal of both technique and attitude, which I think helped differentiate me from a lot of other players around at the time.”

9. Being inventive is what got me where I am today

“I clearly remember the first time I went into a guitar shop in Highland Park, Illinois, to look at effects. There was a delay pedal with every knob cranked all the way up, so I stepped on it and suddenly this guitar went from being just an A chord to this crazy circus of ghosts flying around and endless echoes and thumps. I thought to myself, ‘That is so awesome!’ and I’m sure every guitar player has a moment like that. Then you buy the thing, come home and learn about the subtleties and nuances when you dial it back to flavour the tone.

"I never lost that initial curiosity and ‘let’s see what this thing can do’ inquisitiveness with regards to effects. In conjunction with that, I found myself in a role with Rage that was very unique for a guitar player. I was effectively the DJ in the band! Bridging the world between hip-hop and punk/metal, I had a new role to play and had to develop my own sonic palette in order to figure it all out.”

Join us in celebrating World Guitar Day 2018! Get playing, and share your best guitar videos, pictures, tips and stories with hashtags #WGD18 #worldguitarday