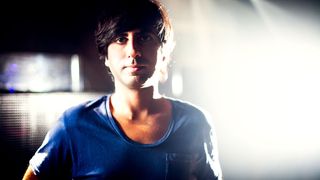 "I'm not a sound guy, and I'm not trying to be. I believe in letting the people who understand it do their great work."

Born in Tel Aviv, Israeli producer Guy J is one of the most sophisticated producers on the club circuit. His music trades heavily on the emotive aspect of the progressive house genre, carving soulful melodic elements into his productions with laser-guided precision.

The DJ, currently residing in Malta, has been making records since 2008, yet already built up a substantial following for his multi-generic DJ sets and sensual, textured releases infusing the more poignant elements of techno and ambient into his progressive house sound.

Guy J's latest release, The Trees, The Sun & The Sea is an ambitious and somewhat epic release, featuring over three hours of music spread over a double CD. We talk to Guy J about his influences and the origins that lay behind the album's sonic depth.

Did Israel have much of an electronic dance scene when you were a youth?

"The electronic scene in Israel was, and still is, very strong. Growing up there, I got exposed to all genres of house music and trance - it was on the radio, on TV, in clubs and on the street.

"I think one of main reasons for being exposed to it when I was growing up is because of MTV and other music channels that were broadcasting good electronic music. I remember clips for bands like Way Out West, System F and many more great tracks."

What was it about music that captured your interest?

"The power of it did - the power to make you feel and unite people, regardless of their issues or origins. Electronic music has no words or language but it's still understandable. I love the fact that people dance to melody - to real music."

Did any particular artists have a big influence on you?

"Guy Gerber and James Holden are my big influences on the production side because the range of genres in their music is very rich. From Gerber, I learned the power of playing a set full of originals. When I heard him play, I didn't recognise any of the tracks and wanted to be able to play a set from originals - now I'm doing it.

"From James Holden, I learned about levels of creativity; he had no limits. Besides the fact that Holden and Gerber are top musicians, they're also a model for producers."

What gear did you buy at first and what type of music did you want to make?

"The first ever gear I bought was the Virus TI, which I still have. I wanted to do Progressive - pure, pure Progressive. Since it was my first instrument and going to be an expensive one, I did lots of research. But it looked like it would be the perfect synth to have, and it's really good for bass, pads and leads especially."

Was it always your intention to float between generic boundaries?

"In the beginning I was more focused on one genre, then I started trying out other stuff, and there are two main reasons for that. First and foremost, as I grew up I became more mature and wanted to try other stuff and get exposed to tougher sounds. Second, I was doing warmups for John Digweed and had to play a bit differently to what I was used to - so I wanted to produce the warm up and play music that no one had heard before.

What was your conceptual approach to your new album The Sea & the Sun?

"Like my last two albums on Bedrock, I did two CDs. I strongly believe in that idea because, besides the obvious, the club tracks mix. At the same time, I can challenge myself and present something different as a musician.

"I think setting the vibe is very important when you're making an album; you have to decide where you're going to take the listener and then work on it. This was my approach for the downtempo CD, but for the club CD I had to choose from the tracks I'd already produced and decide what I was going to use."

How has your studio evolved over the decade since you started making music?

"I started with software using a music sequencer called Impulse Tracker; then I moved to Fruity Loops and Reason and ended up on Cubase, which I still use today, running an RME UFX Soundcard and plugins from UAD.

"I used to have a tiny white MIDI keyboard that a friend gave me, along with two small, grey computer speakers. Now I have five synths, the Dave Smith Prophet 12 and Poly Evolver, a Nord Lead 4, MFB Dominion 1 and the Access Virus TI."

Which of those hardware synths do you like best?

"My favourite has to be the Prophet 12; it's just something that goes beyond any 'regular' synth - it's a monster synth. All five synths give a different colour to my production and add something that the others don't, but the Prophet 12 has no limits. I bought it when it came out and still discover new stuff and new sounds even now."

What do you use on the audio processing front?

"For outboard, I'm using two FX Eventide H9 multi-effects pedals and a Strymon TimeLine effects delay. I use the Eventide a lot - it's a little monster. I process almost everything through it because it helps me to get a wide sound in the final result."

What lies at the heart of your studio?

A strong PC. Let's face it, using a PC is not the easiest thing, the amount of projects I've lost in the past and heart attacks I've had [laughs]. Now I have a very good one, so although those things still happen sometimes, it's much less often.

"What helps is that I record everything on synths, so there aren't that many plugins or VSTs open on each project. In fact, the only soft synth I use is Omnisphere - I love the soundscapes and it has some nice FX, but to be honest I'm addicted to analogue now. It's hard for me to use software, maybe it's the love of touching a synth and actually feeling the music."

Is your choice of DAW and your sound library based on the music you want to make?

"I got into Cubase from a recommendation by a friend and just stayed with it. I think it's hard to say which software is better. This is the one I know how to use and I'm not looking to change. I know other software can offer an easier approach towards writing music, but I'm afraid that using something else will make me lose some of my creativity."

Are you a heavy programmer or sound designer or do you prefer tweaking basic sounds?

"I'm not a heavy programmer, and I'm far from being good with technical terms. I play with the synths a lot and just remember what each knob does and what sounds each one can give me. I don't want to say it will be a waste of time to go and learn other types of things, but I'm happy with the knowledge and skills I've acquired.

"I work very fast and learn very slow! I also think that I rushed into trying new synths and didn't really go very in-depth on them, so I'm slowing down on getting new ones and just looking for tutorials on the ones I do have. Having said that, I do want a Sequential Circuits Prophet 5 - I'm a fan of Dave Smith, and this synth is a milestone!"

Do you mix in the box, on a desk or in a separate studio?

"I mix on headphones and then send my tracks for mastering. I'm not a sound guy, and I'm not trying to be. I believe in letting the people who understand it do their great work. I listen to all my music during the recording process on Sennheiser headphones.

"I used to have the HD25s but now I'm using HD26s. I know their sound very well, but must start using my Dynaudio studio monitors soon - it takes time giving up something you're so used to."

Are you looking forward to testing these tracks live?

"Playing the tracks live is the ultimate test indeed. I won't change a track completely after playing it, but might change some of the levels as this can create a totally different vibe and the idea behind it slightly.

"When you write a track, you have a vision of the vibe it's going to set in a club, then after you play it you can find out whether creating that vibe worked or not."

The new Guy J album 'The Trees, The Sun & The Sea' is out now on Bedrock. For more news and info check out Guy J's Twitter, Facebook, Soundcloud and YouTube pages.