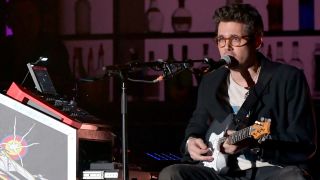 MusicRadar's best of 2018: John Mayer is no stranger to controversy - some guitarists simply refuse to get over his actually-pretty-good Strat-a-like with PRS, the Silver Sky - but in a rare interview with our pals at Guitar World, the blues heartthrob has now detailed his forward-looking approach to recording guitars, which is sure to ruffle a few more traditionalist feathers.

“When I’m playing on people’s sessions these days, I don’t usually bring an amp; I record all my guitars through my Akai MPC [X],” Mayer claims. “Why? Well, because that’s what the rest of the music is suggesting. When everyone is using virtual instruments and virtual effects, there’s no oxygen.

“Those frequencies are so well cordoned off, a Bassman amp with three mics put on it literally will not fit inside the song. There’s a lot of resistance to that from producers.”

We’re surprised Mayer would turn to a standalone unit to record guitar parts rather than go direct into the desk in a studio setting, but it seems to be working, judging from the number of sessions he’s been called upon to perform since switching up his tonal approach.

“My guitar parts are getting on three times more records these days than when I came in with my guitar amp and a couple pedals and mics. It wasn’t fitting the lexicon, so I had to really look at that and ask, ‘Is the old way of doing things really honouring the electric guitar?’

“Pick your favourite guitarists from the ’60s and ask yourself, if they were around today at the age they were in the ’60s, would they have embraced new technology? Damn right, they would’ve! You’re damn right Jimi Hendrix would have been unplugging from a Marshall and holding the guitar cable in his hand, looking around the room going, ‘Where can I plug this into?’”

Although we can’t quite imagine Hendrix guesting with Ed Sheeran or Barbra Streisand, Mayer raises an interesting point: if you’re working with a producer outside of the rock world, they’d most likely prefer a clean DI’d tone that they can manipulate with plugins as opposed to forcing a traditional guitar sound into a crowded mix.

Again, this fuels our ongoing ‘the guitar isn’t dead; it’s just been re-contextualised’ theory, echoed by Muse's Matt Bellamy, who dubbed it “a textural instrument rather than a lead instrument”. Cue outrage in one, two, three…