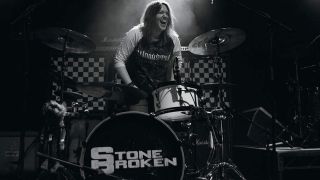 The Walsall band have hard rock in their West Midlands blood, obviously, but their sound also taps into a rich seam of more recent US radio-rock like Alter Bridge, Stone Sour, Black Stone Cherry, Shinedown and others.

Drummer Robyn Haycock was brought up on a diet of Zeppelin courtesy of dad; and Bonham’s booming drum sound, as well as the modern metal drumming of the likes of Joey Jordison and Chris Adler, informs her powerful playing with Stone Broken on their imminent and awesome new album It Ain’t Easy.

“I first got behind a kit when I was 13 years old in my music class at school. At the time I didn’t know what I was doing so I just picked up the sticks and went for it. I was used to hearing the drum sounds of Bonham around the house so I tried to do my best, but what I thought looked cool and sounded even better, in reality wasn’t, haha! But I knew right there and then that all I wanted to do was play drums and that nothing in this world would stop me.”

“John Bonham played a big part when I started off. I used to watch Led Zeppelin DVDs and watch everything that he was doing. My maths teacher handed me a Rush DVD and from then my mind was blown by Neil Peart; just the technicality of his playing is out of this world. I love John Fred Young’s style - he really puts his stamp on all Black Stone Cherry Songs, Daniel Adair is an amazing solid player with technical ability, Barry Kerch, Scott Phillips and Arejay Hale are all awesome players that I love to watch live and listen to on record.”

Were you always drawn to heavy music, and what is it about drummers such as Chris Adler, Joey Jordison and Justin Foley and their style that inspire you to play?

“I’ve always been drawn to hard rock and metal music, there’s just something about it that I absolutely can’t get enough of. About two years into playing drums I joined a metal band and at the time I was listening to bands like Slipknot, Lamb Of God, Killswitch Engage etc. So Adler, Jordison and Foley all played a part in forming my playing style. As soon as I heard Killswitch I got myself a double kick pedal, and then went and watched a load of YouTube videos to nail the technique. I would watch Adler’s technique all the time; I loved his writing process and how he approached Lamb Of God records.”

Which Stone Broken song perfectly captures your sound and style?

“We have a track called Worth Fighting For featuring  on our next album; it’s stompy, crashy, big-sounding, with a solid driving beat throughout. I always play for the song, so whatever the song needs I write my parts to complement it and not take anything away from it.”

Proudest moment of your career to date?

“Playing Download festival for the first time last year is definitely up there along with opening the Main Stage at Ramblin’ Man Fair last year... to step out in front of all those people on that huge stage felt amazing, especially hearing them all singing our songs back at us!”

“When we were on tour with Glenn Hughes in 2017, his drummer, Pontus Engborg, would sit down with me and we would run through different rudiments and sticking patterns, I would then use this as part of my warm up before the show. Also, John Fred Young told me to get a Vater Tacky Sack to help me keep hold of my sticks whilst playing and I’ve used it ever since.”

How do you approach playing live?

“I like to live in the moment and enjoy every part of the show, so I make sure I practise the songs and the set so that I know them both inside and out. I try and bring a lot of energy to the show and really get into the music whether by head-banging, standing up, clapping, laughing... anything goes!”

“For the majority I work off the guitar. Me and Rich [Moss, vocals/guitar] have been jamming together for over 10 years now so we can bounce off each other really well. Rich is very percussive when writing riffs so we tend to gel well together.”

“Have fun and enjoy the time you have on stage. If the crowd can see that you’re having the time of your life, then they enjoy it even more. I make sure I know the set and songs inside out and warm up and stretch before we hit the stage so I can give it my all when I’m playing.”

The band’s sound is very US rock - though you’re from the Midlands, which has a very rich heritage of its own hard rock bands... how much do those classic British hard rock bands like Zep, Sabbath, etc, influence you?

“I’d like to think that they have all played a part in some way or another. I was raised on bands like Led Zeppelin, Black Sabbath and Judas Priest, so they have all left their mark and I don’t think I would be the player I am today if I hadn’t of listened to all of those bands growing up.”