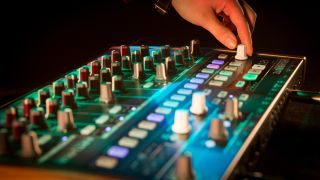 Looking for a new centrepiece for your studio? Or perhaps you feel that something is missing from your production workflow? It’s time to reconsider how you create music and explore the many ways Arturia’s analogue beat-machine, DrumBrute, can bring unbridled creative expression.

We live in a time where nearly everything we think we need is available on tap and when it comes to music production, that tap is usually a software-based one. DAWs come jam-packed with so much content, that you may feel like you’ll never need to leave the comfort of your laptop. There are more sample pack services than the eye can see and pretty much every conceivable genre is covered. When it comes to plugins, be they instruments or effects, you are catered for for at least two lifetimes.

The question is, are the endless options that computer-based music presents us actually making it harder to finish our tracks?

If this question resonates with you then read on, as we think, embracing a hardware-centric workflow has the potential to turn your studio into an unstoppable creative machine - and you can still involve your DAW if you wish!

The starting point here is letting go of what you feel is the core of your studio setup. Let’s for one moment abolish the thought that the DAW is the centre of everything, but instead merely one tool in a larger arsenal of creative tools. Consider now that there is a huge number of outboard tools that can offer you  instant, tactile feedback, and by their very nature force you to make quick decisions and move on.

Hardware is where it’s at and we’re lucky to live in a time where the tools to create a hardware jamming collection  are more affordable and accessible than ever. Sub £200 noise-makers are a ‘thing’ and they’re really useful too, not just toys, and we’ve not even touched on the second-hand market. Think of the weird and wonderful devices, and outboard mixing desks that can be had for a song, since so many musicians have moved to entirely in-the-box workflows .

The trick first , though, is how to get everything singing and dancing along to the same tune, and having enough equipment to make a truly full-sounding track. With hardware comes, usually, two options of control: MIDI or CV, so you are going to need to find something that can ideally operate in both analogue and digital realms. And to make a full track, we’re going to go out there and say you are going to want percussion in there! This is where DrumBrute comes into the fore. At this point, we could tell you that pretty much any hardware drum machine is the perfect rhythmical foundation for your tracks, but with DrumBrute there is so much more.

Arturia’s flagship analogue beat-maker, while rammed with 17 analogue voices (based on classic sounds, more on this later), also contains a very powerful rhythm sequencer that has the power to connect to pretty much anything you can imagine; using  USB, MIDI and analogue clock. You can clock the arpeggiator inputs of ancient synths, you can sync to a tabletop of Korg’s ever-growing Volca range, or you can sync to Arturia’s very own BeatStep Pro (which in turn will perfectly sequence two MIDI or Analogue synths), all via DrumBrute’s MIDI and Clock inputs. with USB, you can connect to your laptop and DAW of choice for a fully integrated hybrid system.

Once you’re connected then the real fun can begin. With a bountiful 17 lanes of MIDI sequencing, you can  use DrumBrute’s physical, immediate interface to sequence your own samples, which could be on your DAW (with the screen turned off, perhaps?) or even an old MIDI hardware sampler (some models are going for next to nothing second hand now) if you’re looking for a more crunchy, lo-fi vibe. You can then take advantage of DrumBrute’s large pads for live performance, and it’s also worth noting that each MIDI lane is capable of spitting out sequences of individual lengths, creating fascinating, complex polyrhythms that phase in and out of one another over time.

While we’re on the subject of interesting rhythms , you can quickly jam in  rolls, with the record and roller functions, dial in flams per-step, slip the timing of individual hits per-step by holding a note and turning the Swing dial for perfectly crafted grooves, done intuitively and quickly with a real physical interface. Once your patterns are created, you can use your DAW as a ‘tape machine’ to record real-time jams, utilising DrumBrute’s mute-group functionality to expertly fly in build-ups and breakdowns.

The in sound from way out

So far, DrumBrute has opened up a ton of possibilities as a hub for your production workflow just merely as a sequencer and we haven’t even got stuck into its onboard sounds. This is where things can get really interesting.

You’d be forgiven into taking DrumBrute’s sound at face value. You’ve probably seen countless YouTube videos explaining what it does and how it sounds and on the basis of that, formed your own opinions on what it can do for you. However, this is just the start - as DrumBrute has multiple outputs allowing sounds to be processed individually. Think of the tone of the machine simply as a blank canvas, you can easily route each drum sound to whatever sound processor you happen to have lying around. And ahead of you lies a world of sound design.

You've no doubt bought the odd effects pedals in your time. Now is their time to shine, no matter how cheap and nasty they may be. Think of DrumBrute’s sounds much like you would an electric guitar. You wouldn’t run an electric guitar straight into a desk for instance. You’ll always want to add colour with an amplifier and effects, to make the sound your own. DrumBrute is very much the same, having been voiced similar to the classic drum machines of old, the sounds are instantly recognisable. Look to those old stompboxes as a way to mould these into a sound that is uniquely yours, be it an old overdrive pedal on the bass-drum, or a chorus on the hats output, or even a cheap ‘90s rackmount reverb on the claps.

Don’t worry if you haven’t any outboard effects - since  you can easily record  individual tracks into your DAW and into any one of the countless bundled plugins at your disposal. Of course, given our hardware philosophy here, we’d definitely recommend thinking about getting an old mixing desk with the pedals all connected to the Aux Sends, for dub-style mixdowns!

So there we have it, a DrumBrute could just be the thing that knits together your hardware jamming rig.  It certainly isn’t just your average drum machine, it’s also a sequencing, sample and creative audio- triggering powerhouse, that also happens to have 17 tweakable classic drum tones onboard you can shape into a sound all your own. If you allow it, it will force you into unearthing new levels of creativity in your productions, and you’ll be doing it intuitively, relying on your ears and your timing - rather than just staring at a screen for hours and hours on end...