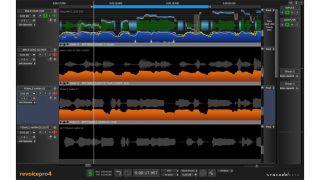 Synchro Arts made its name with the VocALign software, which enables you to match the timing of one audio track to another, but what you might not know is that the company is making great strides in the area of pitch correction, too. In fact, with the latest version of Revoice Pro, version 4.2 - which also offers the company’s best-sounding audio alignment algorithms - it might just have set a new standard.

Released in November 2018, Revoice Pro 4 introduced improved Warp Processes - audio editing features that enable you to make corrective and creative pitch changes quickly and easily. These can be used to make timing and level adjustments, too.

What’s more, the method of doing this is extremely intuitive. The quick-access cursor tool’s function will change as you select select notes, and then adjustments can be made simply by dragging note-box sides and corners.

As well as these manual editing options, you also have a Correct Pitch function - a snap-to-grid process that automatically brings the tuning of large numbers of notes into line.

As you’d hope, all of this processing is done at the highest quality - Synchro Arts has won an Emmy award for its technology, after all - giving natural and transparent pitch correction, but that’s not the end of the story. Thanks to Synchro Arts’ exclusive APT (Audio Performance Transfer) functionality, any edits you make to one track - a lead vocal, for example - can automatically be applied to ‘stacks’ of others. So, the pitch and timing of doubled or backing vocals will instantly be fixed-up, too.

In fact, Revoice Pro is full of features that you won’t find in many of its pitch correcting rivals. Take the Vibrato Warp function, for example, which retains the characteristics of a singer’s vibrato, even when making timing adjustments to the vocal itself. Clever stuff.

There’s more to come, too; as Synchro Arts celebrates its 25th anniversary, Revoice Pro 4.2 is on the way (it’s currently in beta) and is set to introduce frequency-based scale detection, so you can quickly see the specific notes of a vocal performance, along with workflow improvements that will make the editing process even faster and smoother.

Revoice Pro 4.2 also lets you adjust the part of note used to calculate the average pitch, which leads to more natural sounding edits. Here’s a before and after example:

You can expect a better pitch toolbox and formant adjustment, too, which enables you to change the tone and character of a voice. Check it out in action:

It’s also worth noting that, although Revoice Pro doesn’t operate as a plugin - its standalone nature is what enables some of its advanced features, such as the ability to work with multiple inputs and offer region-based processing - it can integrate with your DAW in several different ways. Notably, there’s support for the ARA2 protocol in VST3-equipped software, which means that audio can be exchanged between your apps more elegantly than ever.

The good news is that there’s no need to take our word for any of this, though, as you can download a 14-day trial version of Revoice Pro 4.2 right now. What’s more, the software is available at a 30% discount until 18 November, with 40% off for users of previous versions of Revoice Pro and VocaALign. Revoice Pro 4 owners can download the update for free.

Head on over to the Synchro Arts website and discover next-level pitch correction for yourself.