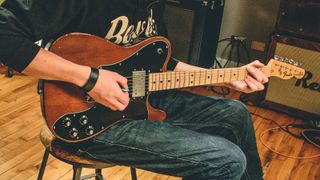 With a humbucker at the neck, classic single-coil twang at the bridge and a mocha finish, this Tele is an icon of '70s Fender guitars

In 1972 Fender released the now iconic humbucker-equipped Telecaster Custom. This new design helped define the style of Fender guitars for the next decade. As loyal fans and younger musicians re-discovered the Tele Custom, various reissue models were made. Nothing's quite like the original, though. That's why the folks at Reverb.com are offering you a chance to win this beautifully worn, all-original '73 model.

This once-in-a-lifetime giveaway celebrates the arrival of Reverb.com in Europe. As an online marketplace, it offers musicians like you a place to buy and sell gear in an informed, passionate, safe and secure community. Reverb is the largest dedicated music gear website in the world, largely because it's free to list items - with no limit on number or length of time - and only charges a modest 3.5% seller fee when you make a sale. Setting up an account is free, and the endless browsing of dream gear, articles and videos is worth it on its own.

Reverb.com was founded in 2013 and has grown explosively since its inception. Founder, David Kalt, owner of a popular Chicago guitar store, built Reverb in 2011 out of his frustration trying to buy and sell gear online.

Kalt's vision was to build an international marketplace focused on serving musicians and gear lovers. To this end, the site features tools to make buying online easy, like a detailed price guide, ability to transact in multiple currencies, international shipping estimates, and complete protection for both the buyer and seller. Go get into it.

Enter to win at Reverb.com/Euro-giveaway

NB. the contest is only open to residents of Denmark, Finland, France, Germany, Netherlands, Norway, Republic of Ireland and the United Kingdom

No purchase necessary. This contest officially begins on April 1st, 2016 and closes May 31th, 2016 at 11:59 p.m. CT. Open to residents of Denmark, Finland, France, Germany, Netherlands, Norway, Republic of Ireland, and the United Kingdom. One prize available to be won, with an approximate retail value of $2,500usd (£1,800gbp). No purchase necessary. Read full terms and conditions at reverb.com. By signing up for the contest, participants you agree to receive emails from Reverb, packed with features and all the best gear deals on the site.