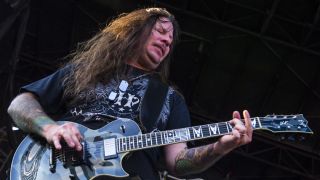 As the subversive rhythm guitarist behind respected Virginian metallers Lamb Of God, Willie Adler's innovative interpretation of the role refuses to play to the stereotype of a dumb chugger.

Much attention is lavished on lead-man Mark Morton, but Adler is a monster player in his own right - a six-stringer who stirs up bizarrely brilliant chord progressions, left-field riffing and some of the finest metal guitar this side of the seven circles -all the while never forsaking the fundamental tightness and space required of the best rhythm men.

We sat down with Willie ahead of Lamb Of God's sizeable Brixton Academy show in January to get his own thoughts on his playing style, his gear and his knack for perfect tone.

How would you summarise your own playing style?

"Primarily, I'm a metal player. I'm not really versed in blues or anything else. I'm self-taught, so you could put sheet music in front of me and you might as well have written it in Chinese. I would like to think that I'm 'tight' and I've got 'machine-gun-like staccato' and all of those terms that dudes throw out there, but I'm my own worst critic, so in my own mind, I'm mediocre at best. I think my odd time structures and signatures are what I'm most well-known for… basically my absurdity as a player!"

Which Lamb Of God song do you consider to be the best showcase of your playing?

"In Your Words. It has those little tech-y riffs at the beginning that are a little left of centre, as far as theory applies. But it has every element of what I try to accomplish as a guitar player: the show-off-y tech-y side, then the real groovy riffs in between for the verses and then the wide open landscape-ish ending to it that kind of creates a moody environment."

Are there any aspects of being a good rhythm player that you think are overlooked?

"The dynamic between yourself and the other guitar player. You have to have a relationship with that other guitar player and a full understanding of where they're gonna go with your riff, or how you're going to complement what they're doing. It's about being able to play off of him/her and create a landscape for that other player to play on top of, or for yourself to create a melody line."

What do you think is the main lesson you've learned from Mark Morton?

"I've become more of a songwriter and I owe a lot of that to Mark. Going from a song like Hour Glass, which is basically riff after riff - that was kind of my M.O. for a long time - then playing with Mark and playing off of Mark and exploring the dynamics in between, you learn that you need to let things breathe and give room to the other elements of the band. We are a band, a collective unit, and it's so much greater than the sum of its parts."

Let's talk about gear. What decisions did you make regarding your signature guitar and how does it complement your style as a player?

"I based it off of the original Eclipse body style from ESP. It was the first guitar that ESP had ever sent me, when I first started talking to them and I really connected with it. Maybe it's the fact that it's based on the classic LP model - it just felt right.

"As far as playability, it's pretty much true to form of the original Eclipse. Then, aesthetically, there are two designs - the Camo one and two others that I'm putting out.

"I insisted on Seymour Duncan '59 humbuckers and now we're doing my own signature pickup based on the Duncan Distortion (read more about Willie's new signature pickups)."

Which amps do you use?

"I'm still a big fan of the MESA/Boogie Mark IV, which I have a slew of in my arsenal. Unfortunately, they discontinued the Mark IV and came out with the Mark V, so I'm using that currently, but it has presets for the IV, the C-Class etc and I find the V to be a very accurate of those models, so it suits my purposes. I'm also messing around with this Royal Atlantic, which has a little more bottom-end to it. The IV, with the five-band EQ means you can pretty much mod it however you want and I really like the IV because it has that bite, but the Royal Atlantic has that bottom-end and is a little more forgiving."

What's the secret to a great metal guitar rhythm tone for you?

"Obviously, saturation, and I like a warm bottom-end. I don't want to say reverb, because that's a 'no-no' word, but to have a little bit of wet on the bottom-end, so that when you attack with the guitar you hear it and you have the high-end and mid-range and then the low-end as almost like a delayed response. It takes me a while to dial-in something, but it's got to have that bite. But then I guess I'm just describing the perfect metal tone!"

When can we expect the next Lamb Of God album?

"Well, typically, we don't really sit down and start writing until a full-on touring cycle is done. However, in between the last few tours I've gone in and written riffs and put some songs together, so I'm a little bit ahead of the game, and I think Mark is as well, as far as going into a record is concerned. We don't usually do it until we're completely off the road, so we're sitting pretty!"

What sort of time-scale are we looking at?

"We've got a couple of one-off shows when we get back to the US, and I'm sure that everyone will want to get away from this for at least a couple of months before we start discussing going into the rehearsal space. You need that break from music, to tell you the truth, just so you can soak up everything else!"