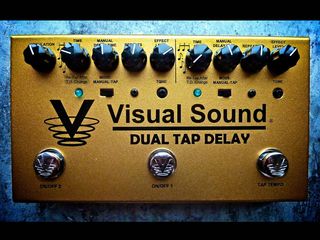 PRESS RELEASE: Headline Music Ltd has announced the UK arrival of the new Visual Sound Dual Tap Delay pedal. The new unit is designed to be both hugely flexible and intuitive, opening up creative avenues for players without having to wade through technical manuals. And hybrid analogue/digital circuitry also delivers the perfect balance between sweet tone and usability.

Close to four years in the making, the Dual Tap Delay offers two separate channels which can be used independently or together, synchronised with a single tap-tempo switch. The two channels are identical, but with the second channel also having a Modulation control to add a Chorus effect to the repeats. Maximum delay time is one second for each channel.

Each channel can be used in either Manual or Tap modes, with controls for Manual Delay Time, Repeats, Effect Level, and Tone, as well as Time Divisions for Tap mode.

Two internal switches also control whether Output 2 is effected or dry, while the other switch sets repeats to be either trailing or non-trailing after the effect is turned off.

The Dual Tap Delay has a recommended retail price of £249.