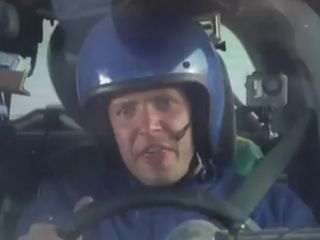 If YouTube and Facebook are indeed the new radio, then OK Go are rulers of the airwaves. Their videos for songs such as Here It Goes Again, This Too Shall Pass and A Million Ways are regarded as modern-day, groundbreaking classics.

That foursome from Chicago are at it again in a clip for the song Needing/Getting, from their most recent album, Out Of The Blue Colour Of The Sky. Dispensing with treadmills, dance routines and Rube Goldberg machines, the band took to the road in a Chevy Sonic (the car company sponsored the video, which premiered during Superbowl XLVI), one which was outfitted with appendages to strike/play over 1000 instruments spread out over a two-mile course in a desert outside of LA.

While you watch the above video, don't assume the whole thing came easy: The shoot required four months of prep time and four days of actual filming (imagine the number of takes involved, with each one starting with "OK, go!"). And lead singer Damian Kulash even took stunt driving lessons for the occasion.

No wonder it takes a while for these guys to put out new records.