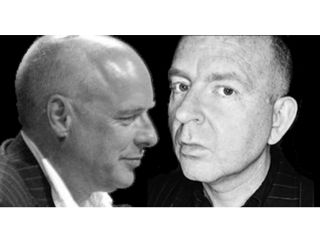 Whether it's John Mayer talking about poo, or Britney Spears telling the world about her most recent relaxing massage, Twitter is rapidly becoming a mainline into the mindsets of music's major players.

But it's not all about sharing utterly trivial information. Oh no. There's handbags too.

Former Creation Records supremo and the man-who-signed-Oasis Alan McGee is no stranger to using blogs and social networking sites to make his opinions felt. And the last 24 hours have seen a remarkable exchange of insults between McGee and über-producer Brian Eno.

Indeed, despite being credited with the invention of chillout music, Eno seems to have been rather riled by McGee's Tweet suggesting that all his productions - presumably including the new U2 album - are good for is making people fall asleep.

McGee also enquired whether it had been Eno's idea to "dress Coldplay up as The Beatles."

This morning, Eno replied with a concise, "Fuck off, wanker". McGee then hit back with "Morning Brian, wondered when you would wake up. When are you going to make a decent record again it was 1972 was the last one cunt."

Should you chose to follow Brian Eno and Alan McGee on Twitter you will find out if they arrange to meet up for a fistfight. That said, we encourage you to be mindful of the wise words of Obi-Wan Kenobi in Star Wars: "Who is more the fool: the fool, or the fool who follows him?"

Alternatively, follow MusicRadar on Twitter for less colourful language and more Tweets than a sack full of canaries.