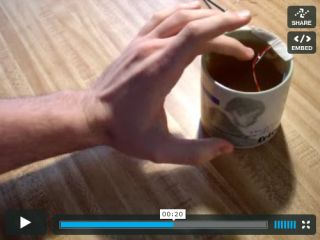 What do you get if you cross an FBI hunted Guns N' Roses track with the world's most swingin' 80-year-old drummer while drinking a cup of Theremin? This weeks best of YouTube, of course…

1. Jeff Beck is still good
Here he is in 2007 in Japan, getting unearthly noises out of his Strat on Goodbye Pork Pie Hat / Brush With the Blues. He's 63 here. Do you think that's his own hair?

2. AC/DC - Let There Be Rock!
A new AC/DC album is imminent. Here's Angus Young when he was in short trousers. Oh, hang on…

3. Guns N' Roses - Chinese Democracy
The Blues is a track mooted for the long-awaited album. Worth 17 years wait?

4. Jimi Hendrix and The Rolling Stones
A curio for hardcore guitar geeks in this video from 1969. There's little original audio, and the soundtrack is a Hendrix outtake called My Little One.

1. The Theremug
Turn your morning cuppa into a touch-free musical instrument (via Synthtopia).

2. Crazy cover
Continuing the theme, the Theremin takes the lead on this version of the Gnarls Barkley classic.

4. Dizzee Rascal plays the Stylophone in Fat Boy Slim's studio
Let's just say that Rolf Harris has nothing to worry about.

5. Justice do their D.A.N.C.E.
Turns out the French duo aren't going to produce the Red Hot Chili Peppers - let's celebrate that by watching this strange, star-filled performance of their biggest hit…

1. Led Zeppelin's John Bonham
As Kashmir is all about the groove, this is going in our 'drums' category. This was Bonham's last performance in the UK.

2. Ringo!
Ringo Starr is 68 years old on Monday. Here he is with Eric Clapton and the late Carl Perkins playing rock'n'roll classic Matchbox.

4. Thomas Lang's stick tricks
Impressive. Should he be in a band? Or a circus?

5. Harold Layne - the world's most swingin' 80-year-old drummer
Get in, granddad!