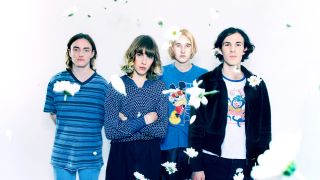 "I'd love to headline O2 Arena or something next year. Why not? Reach high!"

It makes us want to crack out of our usual morbid state where we consider mild economic peril, eBaying our amps and eating our five-a-day, in favour of legging it about fields with our genitalia flapping in the wind. Equal parts Jesus And Mary Chain, Brit-pop and Red Hot Chili Peppers, they've been snapped up by RCA and are due to release debut album Where The Heaven Are We? on 5 August.

We caught up with guitarist Tom 'Higgy' Higgins to talk favourite riffs, covering Led Zeppelin and how he crafts tones that make us take our clothes off...

You met Austin while working in Morrisons. How long had you been playing guitar at that point?

"Probably for about three years. I think I was 14 when I started, which seems quite late really - a lot of people start earlier than that. I was really into metal music, so I used to play Black Sabbath and Metallica, but then when I met Ozzy [Austin] he introduced me to MGMT and all of that sort of stuff. Then I've always been into Led Zeppelin…"

You recently covered a Led Zeppelin song, didn't you?

"Yeah, we did a cover of Down By The Seaside, which was alright, I think! It's quite a mellow song, there's nothing too complicated in it. [If there was] I wouldn't be able to play it, to be honest. I didn't really want to imitate Jimmy Page too much. We did it in a couple of hours. We just worked it out and put our own style on it."

Who were the bands or players that made you pick up the guitar?

"What really made me want to learn was when [2003 film] School Of Rock came out. That was what made me think, 'I wanna play the guitar!' It just looked so cool and everyone in my school year picked up a guitar after watching that film. That was how I got into rock music, like AC/DC etc. It's not the coolest way, but I think it's pretty cool!"

"Probably, the beginning of Under The Bridge [by Red Hot Chili Peppers]. I really like John Frusciante. I think he's my favourite guitar player. He just seems so free and funky at the same time. A lot of guitar players seem like they're trying too hard. He just 'is' the guitar."

"My favourite riff on the whole album is the start to Red Lips I Know. Ozzy wrote that, but I think it's one of the best guitar riffs I've ever heard. When he first showed me it, I was like, 'Fuck - that is Sweet Child O' Mine stuff!' It blew me away, so that's my favourite."

The Brum scene's early party roots are well documented now. When did it go from dicking about at club nights to focussing on the band?

"It was just before Christmas 2011, when we recorded [debut single] King City. We had an actual manager by that point and before the manager we had no real direction. At the start we were just trying to imitate surf rock bands, because we were really into Wavves and Beach Fossils. Then Ozzy started writing without trying to imitate anything and it just sort of happened."

Tell us about the album sessions. Could you describe the location and the atmosphere?

"It was amazing! We lived in the studio [ICP] in Brussels, Belgium. We lived together and slept together. We had our own apartments there and we all pushed our beds together, so we'd sleep together. Then you'd just wake up at 12.00 and go down in your pyjamas and jam a bit."

ICP has a reputation as a bit of gear treasure trove…

"There were hundreds of guitars. And it's all the good stuff as well, from the '60s. There was one really good guitar I used, it was a Fender Squier Strat from the '70s and it was the best guitar I've ever played. I used it across pretty much the whole album."

"I use a Fender Blues Deluxe. It's a limited edition one with a big Jensen speaker in it. Then I have a Japanese Fender Mustang, made in 1992, that I imported from America. I should be getting a Fender Strat soon, which will be great. We've got an endorsement with them, so I have to name drop them a lot… Fender are great!"

Do you have a large FX collection?

"I use quite a lot of pedals. My favourite one is this Strymon El Capistan tape echo thing. I use that on pretty much every song. Then there's a chorus pedal. I use a Small Clone, because that's what Kurt Cobain used, and I've got this fuzz/distortion pedal called the Hoof, made by EarthQuaker Devices. It's the one Dan Auerbach from The Black Keys uses, because I really liked the sound on El Camino."

What do you look for in your guitar tone?

"Just not 'twangy'. I hate twangy! I like soft tones. I really like the sound of The Cure's guitars. They sound really nice. It's almost watery. That's what I go for. I don't like clean guitar tones either. I like FX, but I'm not The Edge, or anything!"

Why did you choose to work with producer Charlie Hugall for the album?

"We'd recorded our second single with him, Honey, and he just really 'got us' more than anyone else and I think that what he produced was really, really good. We'd just joke with him all of the time, but when it came to, 'Right, we've got to work', we'd do it. He was one of us and we got on real well. I consider him a friend now."

Now the album's in the bag and due later this year. What's left on the wish list?

"I'd love a number one, obviously, but top 10 album chart would be great. Then I'd love to headline O2 Arena or something next year. That would be good, as well. Why not? Reach high!"

Swim Deep release Where The Heaven Are We? on 5 August. For more information, visit the official Swim Deep website.