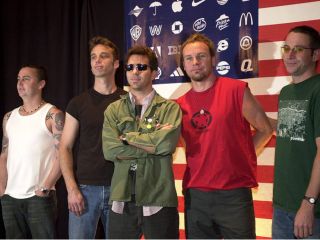 Pearl Jam has started work on their next album, but according to guitarist Mike McCready, things are still in the "very infant stage."

One writing session has yielded "about five ideas so far," says McCready. "Some of the material is kind of poppy and some of it's a little hard. We want it to grow up a little bit. We have to revisit it a few times."

For the follow-up to Pearl Jam's self-titled 2006 release, the band is hunkering down with longtime producer and friend Brendan O'Brien. And though the band is known for previewing new and unrecorded material at its shows, McCready says that's unlikely to happen on Pearl Jam's upcoming North American tour.

"We might get into some sort of jam," the guitarist says. "We have about 200 songs to pull from, so we'll do that and maybe do some obscure B-sides. For new stuff, I don't know if we have it refined enough to want to play it in front of an audience yet. We don't want to hack in front of everybody."

Nonetheless, McCready says that Pearl Jam is looking forward to its first visit to Bonnaroo (the four-day music and arts festival, held June 12-15, in Manchester, Tennessee), where drummer Matt Cameron will also be performing a jazz set. "I think it's a perfect fit," McCready says. "We try to keep everything as in-house and small and as punk rock and do-it-yourself as we can. That's part of our way of doing business. That fits right in with how Bonnaroo is doing theirs."

As for the possibility of jamming with other acts at the festival, McCready says that "if we run into somebody, 'Hey, you want to come up and jam?,' that's kind of how our band works. I'd love to have Jack White up. I think he's just a phenomenal guitar player. I'd love to see him play up close."