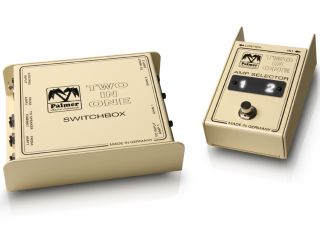 PRESS RELEASE: As guitar players often use more than one amplifier for different sounds, Palmer's Two In One is the perfect solution, solving transport, space and mic'ing up issues. Both sophisticated and simple, the PTINO system connects two amplifiers to a single loudspeaker cabinet and switches between them.

Two In One works with tube amplifiers, transistor amps, and mixed configurations. The Two In One system includes a footswitch, the amp selector, and a 5-pin XLR controller cable. The footswitch is usually placed on the pedal board while the selector unit should be close to the amplifiers to prevent long cable runs.

Both are connected via the dedicated cable. The footswitch features a guitar input, a 9V DC socket for the system power supply, and the XLR connector for the controller cable which powers the amp selector.

The outputs are electrically isolated from each other and the system circuit to eliminate ground loops. Cut and boost are individually adjustable for each output. The selector both switches between the amplifiers and routes the active amplifier output to the loudspeaker cabinet while connecting the other amp to its integrated dummy load. Switching is silent and instantaneous.

Two In One can also be used as AB switcher (e.g. for two combo amps with individual speakers.)