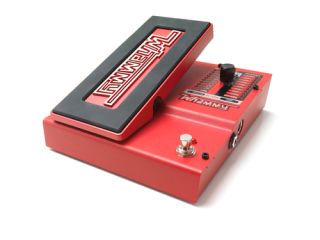 Sound Technology, DigiTech's UK distributor, has announced that the latest version of the brand's iconic Whammy pedal is now shipping.

Now in its fifth iteration, the pitch-shifter is a bit of a sacred cow in the guitar world and DigiTech has been careful not to remove the settings and features beloved by players the world over, but that's not stopped it adding several tempting new ones.

Those with large pedalboards will be relieved to hear that (much-requested) true bypass switching, as featured on the top of the range Whammy DT, and an expanded range of pitch-shifting intervals will now come as standard.

Another key innovation is a new 'chords' mode, which allows players to use the expression pedal to 'bend' whole chords, or switch back to the 'classic' single note mode via a toggle switch.

The ins and outs remain much the same, with a quarter-inch jack input and output, plus a midi in and 9V power supply input. The pedal should be available immediately and has an MSRP of £199.